Briefing from the Synod, day 11

Rights of the Indigenous, evangelization and inculturation were subjects at the centre of today's briefing offered at the Vatican Press Centre: three testimonials from were voiced by Brazilians: His Excellency, Roque Paloschi, Archbishop of Porto Velho; Father Justino Sarmento Rezende, a Salesian priest; and Doctor Felicio de Araujo Pontes Junior, Procurator of the Republic.  There were also two women who spoke at the Press Conference: Patricia Gualinga, the Ecuadorian indigenous leader; and Leah Rose Casimero, academic coordinator of the Quality Bilingual Education Programme for Wapichan children in Guyana. 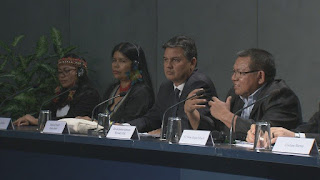 The voices of the representatives of the Amazon were the protagonists of today's briefing on the Synod, where the small working groups are continuing their work and the reports are being drawn up, explained the Prefect of the Holy See's Dicastery for Communication, Paolo Ruffini. Leah Rose Casimero comes from Guyana and belongs to the Wapichan people. She spoke of her experience as coordinator of the Wapichan-English bilingual children's course program which is offered for a local indigenous people. It is a program that includes training in the two languages, that of the indigenous population and English. We have our materials for children, she says, and we incorporate our knowledge and our traditional life. This is therefore a cutting-edge experience meant to help the Wapichan people with a program born of a dialogue with the Jesuits, with other Churches, with other consultants and which has the support of the authorities.

Patricia Gualinga, a leader in the defense of human rights of the Kichwa communities of Sarayaku, Ecuador, also comes from indigenous peoples. Hers is a strong appeal in defence of the Amazon, which is seriously threatened with consequences, she says, for all of humanity. She also made an appeal for an alliance of the indigenous - who are persecuted and even murdered - with the Church.

Felicio de Araujo Pontes Junior was also the focus of the briefing on the defence of the rights of the populations in the Amazon and also those of the descendants of African Americans. He comes from Brazil and is a prosecutor of the Republic and a specialist in the laws of the indigenous peoples. Many times these people come into conflict with the prevailing development model, he explains, focusing also on the increase in farms and monocultures and highlighting how humans do not have the right to eliminate ecosystems by waving the banner of progress.

The experience of the Salesian, Father Justino Sarmento Rezende, an expert in indigenous spirituality and inculturated pastoral care, was also very strong. He comes from the Tuyuca people of Brazil. His is a vocation born of his experience of the missionaries who taught catechism to his grandparents. It also stems from the desire to be able to transmit faith in his mother tongue, since the Church understood that the natives, once evangelized could in turn themselves become evangelizers. He has been a priest for 25 years. In his speech, his gratitude to the missionaries stands out for having brought the Gospel together with the desire to know the indigenous cultures. It is a matter of carrying on the dialogue patiently, knowing the life of those peoples. 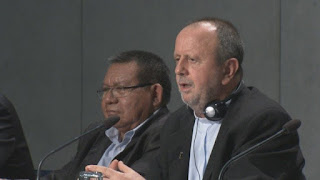 His Excellency, Roque Paloschi, Archbishop of Porto Velho, Brazil, and President of the Indigenous Missionary Council (CIMI), also highlighted the rights of indigenous peoples who have suffered discrimination, while also referring to the problem of traditional lands. The 1988 Constitution - he explained - foresaw that by 1993 all the lands of the original peoples had to be demarcated, homogenized and registered, while not even a third were demarcated and those that were not demarcated were invaded, targeted by the gold miners from the mining industries as well as the oil and timber industries.

In his speech he pointed out, in particular, that inculturation is not done with proselytism, but with witness. It is not a question of imposing a culture from above, of canceling the culture of others, continues Bishop Paloshi, but of preserving the seeds present in every culture because no culture is perfect and the proclamation of the Gospel is, in fact, a proclamation of new life and we all need to become a new person in our encounter with Christ.
at 17:40