Mass to Conclude the Synod for the Amazon Region 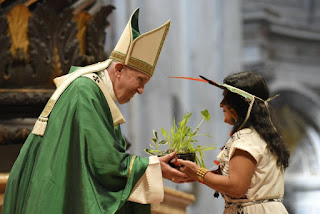 Homily of the Holy Father, Pope Francis
for the Mass celebrated
at the conclusion of the Synod of Bishops

The word of God today helps us to pray through three figures: in Jesus’ parable both the Pharisee and the tax collector pray, while the first reading speaks of the prayer of a poor person.

1. The prayer of the Pharisee begins in this way: God, I thank you.

This is a great beginning, because the best prayer is that of gratitude, that of praise. Immediately, though, we see the reason why he gives thanks: that I am not like other men (Lk 18:11). He also explains the reason: he fasts twice a week, although at the time there was only a yearly obligation; he pays tithes on all that he has, though tithing was prescribed only on the most important products (cf Dt 14:22ff). In short, he boasts because he fulfils particular commandments to the best degree possible. But he forgets the greatest commandment: to love God and our neighbour (cf Mt 22:36-40). Brimming with self-assurance about his own ability to keep the commandments, his own merits and virtues, he is focused only on himself. The tragedy of this man is that he is without love. Even the best things, without love, count for nothing, as Saint Paul says (cf 1 Cor 13). Without love, what is the result? He ends up praising himself instead of praying. In fact, he asks nothing from the Lord because he does not feel needy or in debt, but he feels that God owes something to him. He stands in the temple of God, but he worships a different god: himself. And many prestigious groups, Catholic Christians, go along this path.

Together with God, he forgets his neighbour; indeed, he despises him. For the Pharisee, his neighbour has no worth, no value. He considers himself better than others, whom he calls literally the rest, the remainders (loipoi, Lk 18:11). That is, they are leftovers, they are scraps from which to keep one’s distance. How many times do we see this happening over and over again in life and history! How many times do those who are prominent, like the Pharisee with respect to the tax collector, raise up walls to increase distances, making other people feel even more rejected. Or by considering them backward and of little worth, they despise their traditions, erase their history, occupy their lands, and usurp their goods. How much alleged superiority, transformed into oppression and exploitation, exists even today! We saw this during the Synod when speaking about the exploitation of creation, of people, of the inhabitants of the Amazon, of the trafficking of persons, trade in human beings! The mistakes of the past were not enough to stop the plundering of other persons and the inflicting of wounds on our brothers and sisters and on our sister earth: we have seen it in the scarred face of the Amazon region. Worship of self carries on hypocritically with its rites and prayers – many are Catholics, they profess themselves Catholic, but they have forgotten that they are Christians and human beings – forgetting the true worship of God which is always expressed in love of one’s neighbour. Even Christians who pray and go to Mass on Sunday are subject to this religion of the self. Let us examine ourselves and see whether we too may think that someone is inferior and can be tossed aside, even if only in our words. Let us pray for the grace not to consider ourselves superior, not to believe that we are alright, not to become cynical and scornful. Let us ask Jesus to heal us of speaking ill and complaining about others, of despising this or that person: these things are displeasing to God. And at Mass today we are accompanied providentially not only by indigenous people of the Amazon, but also by the poor from our developed societies: our disabled brothers and sisters from the Community of L’Arche. They are with us, in the front row.

2. Let us turn to the other prayer. The prayer of the tax collector helps us understand what is pleasing to God. He does not begin with his own merits but with his shortcomings; not with his riches but with his poverty. His was not economic poverty – tax collectors were wealthy and tended to make money unjustly at the expense of their fellow citizens – but he felt a poverty of life, because we never live well in sin. The tax collector who exploited others admitted being poor before God, and the Lord heard his prayer, a mere seven words but an expression of heartfelt sincerity. In fact, while the Pharisee stood in front of him, on his feet (cf Lk 18:11), the tax collector stood far off and would not even lift up his eyes to heaven, because he believed that God is indeed great, while he knew himself to be small. He beat his breast (cf Lk 18:13), because the breast is where the heart is. His prayer is born straight from the heart; it is transparent. He places his heart before God, not outward appearances. To pray is to stand before God’s eyes – it is God looking at me when I pray – without illusions, excuses or justifications. Often our regrets filled with self-justification can make us laugh. More than regrets, they seem as if we are canonizing ourselves. Because from the devil come darkness and lies – these are our self-justifications; from God come light and truth, transparency of my heart. It was a wonderful experience, and I am so grateful, dear members of the Synod, that we have been able to speak to one another in these weeks from the heart, with sincerity and candour, and to place our efforts and hopes before God and our brothers and sisters.

Today, looking at the tax collector, we rediscover where to start: from the conviction that we, all of us, are in need of salvation. This is the first step of the true worship of God, who is merciful towards those who admit their need. On the other hand, the root of every spiritual error, as the ancient monks taught, is believing ourselves to be righteous. To consider ourselves righteous is to leave God, the only righteous one, out in the cold. This initial stance is so important that Jesus shows it to us with an unusual comparison, juxtaposing in the parable the Pharisee, the most pious and devout figure of the time, and the tax collector, the public sinner par excellence. The judgment is reversed: the one who is good but presumptuous fails; the one who is a disaster but humble is exalted by God. If we look at ourselves honestly, we see in us all both the tax collector and the Pharisee. We are a bit tax collectors because we are sinners, and a bit Pharisees because we are presumptuous, able to justify ourselves, masters of the art of self-justification. This may often work with ourselves, but not with God. This trick does not work with God. Let us pray for the grace to experience ourselves in need of mercy, interiorly poor. For this reason too, we do well to associate with the poor, to remind ourselves that we are poor, to remind ourselves that the salvation of God operates only in an atmosphere of interior poverty.

3. We come now to the prayer of the poor person, from the first reading. This prayer, says Sirach, will reach to the clouds (Sir 35:21). While the prayer of those who presume that they are righteous remains earthly, crushed by the gravitational force of egoism, that of the poor person rises directly to God. The sense of faith of the People of God has seen in the poor the gatekeepers of heaven: the sense of faith that was missing in the Pharisee’s utterance. They are the ones who will open wide the gates of eternal life ... or not. They were not considered bosses in this life, they did not put themselves ahead of others; they had their wealth in God alone. These persons are living icons of Christian prophecy.

In this Synod we have had the grace of listening to the voices of the poor and reflecting on the precariousness of their lives, threatened by predatory models of development. Yet precisely in this situation, many have testified to us that it is possible to look at reality in a different way, accepting it with open arms as a gift, treating the created world not as a resource to be exploited but as a home to be preserved, with trust in God. He is our Father and, Sirach says again, he hears the prayer of one who is wronged (Sir 35:16). How many times, even in the Church, have the voices of the poor not been heard and perhaps scoffed at or silenced because they are inconvenient. Let us pray for the grace to be able to listen to the cry of the poor: this is the cry of hope of the Church. The cry of the poor is the Church’s cry of hope. When we make their cry our own, we can be certain, our prayer too will reach to the clouds.
Testo originale nella lingua italiana
Texte en français
Texto en español
Texto em português
Text in Deutsch