@ the Synod today: living celibacy in the Amazon

At the Holy See Press Centre today, the usual briefing on the activities of the Synod were reported by Cardinal Benjamin Stella, Prefect of the Congregation for Clergy; His Excellency, Alberto Taveira Corrêa, Archbishop of Belém do Parà (Brazil), Eleazar López Hernández, an indigenous Catholic priest from the Zapoteca people (Mexico); Sister Mariluce dos Santos Mesquita, a religious belonging to the Barassna ethnicity (Brazil) and Delio Sticonatzi Camaiteri, a member of the Ashaninca people (Peru). 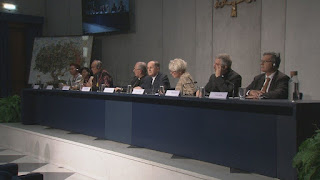 In the centre is Jesus Christ. Jesus unites us. These words of the representative of an indigenous people uttered during the press conference have the strength of a heartfelt appeal and the intensity of a plea. Delio Siticonatzi Camaiteri, a member of the Ashaninca people, an Amazonian ethnic group from Peru, spoke them. He answered a journalist's question about the proposal, which emerged during the synod working sessions, of a specific Amazon rite:

I see you a little restless as if you were unable to understand what the Amazon needs. We have our vision of the cosmos, our way of looking at the world around us. Nature brings us closer to God. It brings us closer to looking at the face of God in our culture, in our living. We as natives live in harmony with all living beings. I see that the idea you have of us natives is not clear. I see you worried, with doubts about this reality that we seek as indigenous people. Do not harden your hearts, you must sweeten your hearts This is Jesus' invitation. He invites us to live together. We believe in one God. We must remain united. This is what we want as natives. We have our rituals, but this rite must be based in the centre which is Jesus Christ. There is nothing else to discuss on this subject. The centre that unites us in this Synod is Jesus Christ. (Delio Siticonatzi Camaiteri, member of the Ashaninca people).

Delio Siticonatzi Camaiteri also explained that the Synod is a source of hope for the natives. The Amazon, he said, is an immense reality that suffers and screams because we have not been able to exploit it. We place our hopes in the Synod because so far, he added, we have not been heard. They are killing us - he explained - because they think we have no rights. This Synod, underlined Delio Siticonatzi Camaiteri, marks the opening of a space for dialogue and meeting to defend the Amazon. A space not only for the Amazon but for the whole world.

Responding to a question about expectations related to the Synod, His Excellency, Alberto Taveira Corrêa, Archbishop of Belém do Pará, Brazil, said: We are not here as if there were a list of desires, or decisions that must be made in the direction that I or other people might want. We are here to take a journey together and to try to put it in the hands of the Holy Father. I am very confident, I have high hopes.

Celibacy is the great beauty of a priest's life, but it must be cultivated because it is a treasure that we cultivate in clay pots. Cardinal Beniamino Stella, Prefect of the Congregation for the Clergy, used these words to describe the gift of celibacy to journalists. It is a gift of God, which must be received. The Church - he recalled - remains the only institution that preaches a commitment forever: for priests, consecrated life and marriage. The gift of celibacy - said the Cardinal - represents a great personal challenge for young people and priests today. 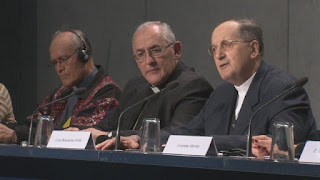 Prayer, discipline and personal commitment, said cardinal Stella, are the three requirements for living celibacy. We must speak to the young and present them - the cardinal said - the needs of the Latin priesthood as a great commitment and great beauty. In order to be accepted, a vocation, needs the balance of a healthy mind and transparent affectivity. What the Synod can say about the new ministry paths - he concluded - we leave that to the discernment of the synod fathers and to the final discernment of the Holy Father.

The Prefect of the Congregation for the Clergy also answered a question related to the proposal of an Amazon rite: It is natural - he said - that this initiative should come from the Synod: Amazonian peoples feel the need to be able to communicate with their language, their symbols and their local rituals. Amazonia is a multi-ethnic, multi-lingual reality, composed of hundreds of ethnic groups and hundreds of languages. There is an expectation in this matter and also a concrete need: we will see what the Synod will say.

We want to be able to express our faith in our culture and in our language, explained Eleazar López Hernández, an indigenous Catholic priest belonging to the Zapotec people (Mexico). The Church - he said - needs to generate specific faces in which a Christian proposal flourishes. Finally, the theme of indigenous spirituality was at the centre of the intervention of Sister Mariluce dos Santos Mesquita, a religious belonging to the Barassana ethnic group (Brazil): Pope Francis is listening and proposing to recognize, to deepen more indigenous spirituality by interacting with the Word of God, which we already preach.
at 16:37