At 10:15am today local time in Rome (4:15am EDT), in Saint Peter's Square, the Holy Father, Pope Francis celebrated the Holy Mass and presided over the rite of Canonization of the Blesseds: 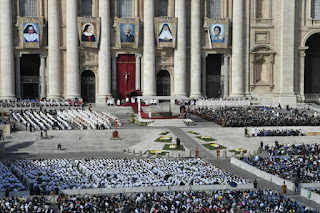 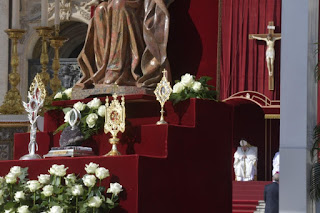 Homily of the Holy Father, Pope Francis
for the Canonization Mass

Your faith has saved you (Lk 17:19).  This is the point where today's Gospel begins, a passage which shows us the path of faith. On this journey of faith we see three stages, marked by the lepers who were healed: they invoke, they walk and they thank.

First of all, they invoke. Those lepers were in a terrible condition, not only because of the disease which, still widespread today, must be fought with all efforts, but also because of social exclusion. At the time of Jesus they were considered unclean and as such they had to be isolated, kept apart (cf Lv 13.46). In fact, we see that when they went to Jesus, they stopped at a distance (cf Lk 17:12). However, even though their condition set them aside, they invoked Jesus aloud (Lk 17:13). They did not let themselves be paralyzed by the exclusions of men and they cried out to God, who does not exclude anyone. This is how distances are shortened, how we get up from loneliness: not closing in ourselves and in our regrets, not thinking of the judgments of others, but invoking the Lord, because the Lord hears the cry of one who is alone.

Like those lepers, we also need healing, everyone does. We need to be healed of our distrust in ourselves, in life, in the future; we need to be healed of our many fears; the vices to which we are slaves; we need to be healed of our many closures, dependencies and attachments: to the game, to money, to television, to mobile phones, to the judgment of others. The Lord frees and heals the heart, if we invoke him, if we say to him: "Lord Jesus, I believe you can heal me; heal me from my closures, deliver me from evil and fear.  The lepers are the first, in this Gospel, to invoke the name of Jesus. Then a blind man and an wrongdoer hanging on the cross would also do it: needy people invoke the name of Jesus, which means God saves. They call God by name, directly and spontaneously. Calling by name is a sign of confidence, and the Lord likes it. Faith grows in this way, through trusting invocation, by bringing to Jesus what we are, with an open heart, without hiding our miseries. We invoke Jesus' name with confidence every day: God saves. Let's repeat the word aloud: it is a way of praying, saying Jesus is praying. Prayer is the door of faith, prayer is the medicine of the heart.

The second word is walking. It is the second stage. In today's brief Gospel a dozen movement verbs appear. But what is most striking is the fact that the lepers are not healed while they are standing before Jesus, but afterwards, as they are walking: While they were going they were purified, says the Gospel (Lk 17:14). They are healed by going to Jerusalem, that is, while facing an uphill walk. It is in the journey of life that one is purified, a path that is often uphill, because it leads upwards. Faith requires a journey, going out, it works wonders if we get out of our accommodating certainties, if we leave our reassuring ports, our comfortable nests. Faith increases with the gift and grows with risk. Faith proceeds when we go ahead equipped with trust in God. Faith makes its way through humble and concrete steps, as were the path of the lepers and Naaman's bathing in the Jordan River (cf 2 Kings 5:14-17) . It is also true for us: we advance in faith with humble and concrete love, with daily patience, invoking Jesus and going forward.

There is another interesting aspect in the journey of the lepers: they move together. They went and were purified, says the Gospel (Lk 17:14), the words are always in the plural: faith is also about walking together, never alone. However, once healed, nine go their own way and only one goes back to thank Jesus, and then Jesus expresses all his bitterness: And where are the others? (Lk 17:17). It almost seems that he asks the only one who returns about the other nine. It is true, this is our task - a task for us who are here to Eucharist, that is, to give thanks - it is our task to take care of those who have stopped walking, of those who have lost their way: we are custodians of distant brothers and sisters, all of us ! We are intercessors for them, we are responsible for them, that is, we are called to answer them, to take them to heart. Do you want to grow in faith? You, who are here today, do you want to grow in faith? Then take care of a distant brother, a distant sister.

Invoke, walk and give thanks: that is the last stage. Only the one who thanks Jesus hears the words: Your faith has saved you (Lk 17:19). It is not only healthy, it is also safe. This tells us that the point of arrival is not health, not being well, but meeting with Jesus. Salvation is not a matter of drinking a glass of water to stay in shape, it is about going to the source, which is Jesus. He alone frees us from evil, and heals the heart, only an encounter with Jesus saves, makes life full and beautiful. When we meet Jesus, our thank you is born spontaneously, because we discover the most important thing in life: not to receive a grace or solve a problem, but to embrace the Lord of life. And this is the most important thing in life: embracing the Lord of life.

It is beautiful to see that that healed man, who was a Samaritan, expressed joy with his whole self: he praised God in a loud voice, he prostrated himself, he gave thanks (cf Lk 17:15-16). The culmination of the journey of faith is to live by giving thanks. We can ask ourselves: do we, who have faith, live our days as a burden, filled with suffering or as a time of praise to be offered? Do we remain centred on ourselves, waiting to ask for the next grace or do we find our joy in giving thanks? When we give thanks, the Father is moved and pours out the Holy Spirit over us. Giving thanks is not a question of courtesy, of etiquette, it is a question of faith. A heart that gives thanks remains young. Saying Thank you, Lord when we wake up, during the day and before going to bed is the antidote to the aging of the heart, because otherwise the heart gets old and gets used badly.  The same is also true in the family, between spouses: remember to say thank you. Thank you is the simplest and most beneficial word.

Invoke, walk, thank. Today we thank the Lord for the new saints, who have walked in faith and whom we now invoke as intercessors. Three of them are nuns; they show us that religious life is a path of love in the existential peripheries of the world. Saint Marguerite Bays, on the other hand, was a seamstress; she reveals to us how powerful simple prayer, enduring patience, silent donation can be: through these acts and attitudes the Lord revived in her, in her humility, the splendour of Easter. This is the holiness of daily life, of which the holy Cardinal Newman spoke; he said: The Christian possesses a deep, silent, hidden peace which the world does not see ... The Christian is joyful, calm, good, lovable, courteous, naive, modest; he has no claims to pretence, ... his behaviour is so far removed from ostentation and refinement that at first sight one can easily take him for an ordinary person (Parochial and Plain Sermons, V, 5). We ask to be like this, gentle lights among the darkness of the world. Jesus, stay with us and we will begin to shine as you shine, to shine so as to be a light for others" (Meditations on Christian Doctrine, VII, 3). Amen.

At the conclusion of the Mass celebrated in Saint Peter's Square for the Canonization of five Blesseds, Pope Francis led the recitation of the Angelus with the faithful and with pilgrims who were present. 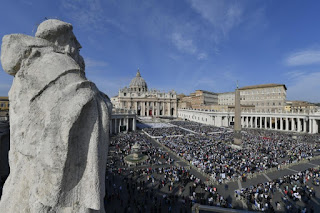 Before concluding this Eucharistic celebration, I wish to greet and thank all of you.

I thank my brother Cardinals and Bishops, as well as the priests and the religious men and women who have come from every corner of the world, especially those who belong to the spiritual families of the new Saints.  I greet all the lay faithful who are gathered here.

I greet the official delegations from various countries, especially the President of the Italian Republic and His Highness, the Prince of Wales.  In effect, with their gospel witness, these Saints have contributed to the spiritual and social growth of their respective nations.

A special thought is extended to the delegates from the Anglican Communion, with sincere gratitude for their presence, and I also welcome you, dear brother, the new Bishop here in Rome.

I greet all of you, dear pilgrims, as well as those who have followed this Mass on the radio and on television.  A special greeting is extended to the faithful from Poland, who are celebrating the Pope's Day today: thank you for your prayers and for your constant affection.

And my thoughts once more go out to the Middle East.  In particular, to beloved and martyred Syria where once again we are receiving dramatic news about the departure of people from the north-east of the country, those who have been forced to abandon their homes because of military action: among these people, there are also many Christian families.  To all those who are involved, and to the International Community, I say: please, I renew my call for sincere commitment, with honesty and transparency on the path to dialogue in order to seek effective solutions.

Together with all the members of the Synod of Bishops for the Pan-Amazonian Region, especially those who are participating from Ecuador, we are following with great concern the events that are unfolding in these recent weeks in that country.  I entrust the Ecuadorian people to the common prayer and the intercession of the new saints, and I join in your suffering for those who are dead, wounded and missing. I encourage you to seek social peace, with particular attention to the most vulnerable populations, the poor and to the protection of human rights.

And now, let us turn to the Virgin Mary, a model of gospel perfection, and let us ask her to help us follow the example of the new Saints.
at 08:25