A visit to the Community of Sant'Egidio in Rome

This afternoon, at 4:35pm (11:35am EDT), the Holy Father, Pope Francis went to Santa Maria in Trastevere in Rome, to visit the Community of Sant'Egidio on the occasion of the 50th anniversary of its foundation.  Upon his arrival, His Holiness was welcomed by the Community's President, Marco Impagliazzo, its founder, Andrea Riccardi and by the Pastor of Santa Maria in Trastevere, Monsignor Marco Gnavi.  The Pope stopped briefly in front of the Basilica and then, following a few words of welcome offered by Professor Marco Impagliazzo, His Holiness offered words of greeting and thanks to the faithful who were gathered in the square in the pouring rain.

Inside the Basilica, the Pope met with representatives from various cities in Italy and throughout the world, along with youth and the poor who are friends of the Community, including some refugees who have received humanitarian assistance as well as some homeless, sick, elderly persons and children.  Following the Liturgy of the Word, testimonials were presented by one elderly person, one refugee, one young person and a mediator; then Professor Andrea Riccardi - who founded the Community in Rome fifty years ago - spoke.  Finally, the Holy Father shared a speech and imparted his blessing upon all those who were present.

Before returning to the Vatican, the Pope paused once more to greet the faithful who were gathered outside the Basilica. 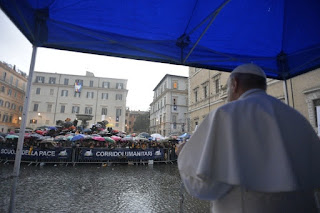 Greetings of the Holy Father, Pope Francis
offered to those gathered outside the
Basilica of Santa Maria in Trastevere

Good evening ... it's not such a good evening!  Doctor Impagliazzo said that Rome has its doors open, but also the skies have their doors open and all this water has fallen and is bathing us!  Still with the doors open!  Thank you, Thank you for coming.  Thank you for being here and thank you for your generosity.

Inside this place there is generosity.  And also an open heart: a heart that is open to everyone, everyone, everyone!  Without making any distinction: I am happy about this, I am not happy about that; this person is a friend, this one is an enemy ...  No.  Everyone, everyone!  Our hearts should be open to everyone.  And this helps our lives to go on.  I thank you very much and I wish you well, every one of you, your families and also I wish you good dreams.  May the Lord bless you. And pray for me.  Thank you. 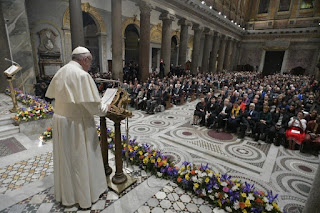 Greetings of the Holy Father, Pope Francis
shared inside the Basilica of Santa Maria in Trastevere

Thank you for your welcome! I am happy to be here with you for the fiftieth anniversary of the Community of Sant’Egidio. From this square, in front of the basilica of Santa Maria in Trastevere, the heart of your evening prayer, I wish to embrace all your communities scattered around the world. I greet you all, particularly Professor Andrea Riccardi, whose inspired intuition initiated this path, and President Professor Marco Impagliazzo, for his words of welcome.

You did not wish to make this day a mere celebration of the past, but rather and above all a joyful expression of responsibility for the future. This calls to mind the evangelical parable of the talents, which tells of a man who going on a journey, summoned his slaves and entrusted his property to them (Mt 25,14). To each of you, too, whichever your age may be, is given at least one talent. On this talent is inscribed the charisma of this community, which I synthesized with these words when I came here in 2014: prayer, poor and peace. And I added: As you walk this path, you help compassion grow in the heart of society — which is the true revolution, that of compassion and tenderness — to cultivate friendship in place of the ghosts of animosity and indifference (Meeting with the Community of Sant’Egidio, June 15, 2014).

Prayer, poor and peace: this is the talent of the Community, which has matured over fifty years. You joyfully receive it anew today. In the parable, however, one of the slaves hid the talent in a hole in the ground, and justified himself in these terms: I was afraid, and I went and hid your talent in the ground (Mt 25:25). This man was unable to invest the talent in the future, because he allowed himself to be counselled by fear.

The world today is often inhabited by fear. It is an ancient disease: the call not to be afraid often recurs in the Bible. Our time experiences great fear as it faces the vast dimensions of globalization. And fear often turns against people who are foreign, different, poor, as if they were enemies. So then we defend ourselves from these people, and we believe we are preserving what we have and what we are. The atmosphere of fear can infect also those Christians who hide the gift they have received, like the slave in the parable: they do not invest it in the future, they do not share it with others, they keep it for themselves.

When we are alone, we are easily the victims of fear. But your path directs you to look at the future together: not alone, not by yourselves. Together with the Church. You have benefited from the great impulse to community life and to being people of God that came from the Second Vatican Council, which stated: God, however, does not make men holy and save them merely as individuals, without bond or link between one another. Rather has it pleased Him to bring men together as one people (Lumen Gentium, 9). Your Community, born at the end of the Sixties, is a daughter of the Council, of its message and of its spirit.

The future of the world seems uncertain. Look at how many open wars there are! I am aware that you pray and work for peace. Let us think of the sorrows of the Syrian people, whose refugees you have welcomed in Europe through the humanitarian corridors. How is it possible, after the tragedies of the twentieth century, to fall back into the same foolish scheme? But the Word of the Lord is light in the darkness, and it gives hope for peace; it helps us not to be afraid even in front of the power of evil.

On this stage you have written the words of the Psalm: Your word is lamp to my feet, and a light to my path (Ps 119:105). We have celebrated the coming of the Word of God among us. With this same spirit you have welcomed what I proposed to every community at the end of the Extraordinary Jubilee of Mercy (cf Misericordia et misera, 7). The Word of God has protected you in the past from the temptations of ideology, and today it delivers you from the intimidation of fear. For this reason I exhort you to love the Bible, and spend increasingly more time it. Everyone shall find in it the source of mercy for the poor, and for those who are wounded by life and war.

The Word of God is the lamp with which we look to the future, even the future of this Community. In this light we can read the signs of the times. Blessed Paul VI said: in our eyes the world is made into a book (General Audience, 16th April 1969). A book to read with the eyes and heart of God. This is the spirituality that springs from the Council, which teaches profound and attentive compassion for the world.

Since your Community was born, the world has become global: economy and communications have, so to speak, unified. But for many people, especially the poor, new walls have been lifted. Diversity is an occasion for animosity and conflict; a globalization of solidarity and of the spirit which still waits to be built. The future of the global world is living together: this ideal calls for the commitment to build bridges, to keep dialogue open, to continue and to meet with one another.

It is not only a political or organizational issue. Everyone is called to change his or her heart, acquiring merciful eyes to look at the others, turning into artisans of peace and prophets of mercy. The samaritan in the parable took care of the half dead man on the road, because when he saw him, he was moved with pity (Lk 10:33). The samaritan had no specific responsibility towards that wounded man, and he was a foreigner. But he behaved like a brother, because his eyes were merciful. Christians, by their very vocation, are brothers and sisters to every person, especially the poor, even though a person may be their enemy. Never say I have nothing to do with this. Merciful eyes commit us to living the creative audaciousness of love, and there is so much need of it! We are everyone’s brothers and sisters, and for this reason we are prophets of a new world; and the Church is a sign of the unity of the human race, among nations, families and cultures.

I wish this anniversary to be a Christian anniversary: not a time to assess results or difficulties; not a time of balances, but a time when our faith is challenged to turn into a new audaciousness for the Gospel. Audaciousness is not the courage of a day, it is the patience of a daily mission in the city and in the world. A mission to patiently weave together again the human fabric of the peripheries that violence and impoverishment have torn apart; a mission to communicate the Gospel through personal friendship; to show how life truly becomes human when it is lived beside the poor; a mission to create a society that considers no one a foreigner. It is the mission to cross borders and walls, to join together.

Today, more than ever, carry on audaciously on this path. Carry on standing at the side of the children of the peripheries, with the Schools of Peace that I have visited; carry on being at the side of the elderly: sometimes they are discarded, but to you they are friends. Carry on opening new humanitarian corridors for the refugees of war and hunger. The poor are your treasure!

The apostle Paul writes: So let no one boast about human leaders. For all things are yours ... and you belong to Christ, and Christ belongs to God (1 Cor 3, 21.23). You belong to Christ! It is the sense that is found in the depths of your history to this day, but above all it is the key to face the future. Always belong to Christ in prayer, in caring for his little brothers and sisters, in seeking peace, for He is our peace. He will walk with you, he will protect you and guide you! I am praying for you, and you pray for me. Thank you.