Captains Regent from San Marino at the Vatican 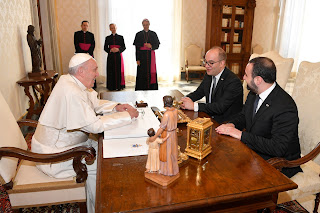 Today, the Holy Father, Pope Francis received in audience the Captains Regent of the Most Serene Republic of San Marino, Their Excellencies Mister Matteo Fiorini and Mister Enrico Carattoni, who subsequently met with His Eminence, Cardinal Pietro Parolin, Secretary of State of His Holiness, accompanied by His Excellency, Monsignor Paul Richard Gallagher, Secretary for Relations with States.

During the cordial discussions, great satisfaction was expressed for the constructive relations that unite the Holy See and the Republic of San Marino, underlining the joint effort to strengthen bilateral cooperation. The positive contribution of the local Church to Sammarinese society, especially in the social and educational fields, was also acknowledged.

Attention then turned to various themes of mutual interest, such as the migratory phenomenon, prospects for the future of the European project, and the international situation.
at 21:50