Austria at the Vatican 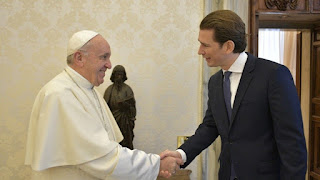 This morning, the Holy Father, Pope Francis received in audience, in the Vatican Apostolic Palace, the Chancellor of the Republic of Austria, His Excellency, Mister Sebastian Kurz, who subsequently met with His Eminence, Pietro Parolin, the Cardinal Secretary of State, accompanied by Monsignor Antoine Camilleri, Under-Secretary for Relations with States.

In the cordial discussions, the good bilateral relations and the fruitful collaboration existing between the Holy See and Austria were evoked, underlining the importance of the protection of life and the family and the promotion of the common good of society, especially with regard to the weakest sectors of the population.

Mention was then made of the country’s contribution within the European Union and the need for solidarity between peoples. Finally, attention turned to various current international issues, including peace, nuclear disarmament and migration.
at 08:24