At 7:00am this morning (2:00am EDT), the Holy Father, Pope Francis departed from the Vatican heliport and travelled to Pietrelcina (in the Diocese of Benevento) and to San Giovanni Rotondo (in the Diocese of Manfredonia-Vieste-San Giovanni Rotondo where celebrations are in progress to mark 100 years since the apparition of the permanent stigmata that marked the body of Saint Pio of Pietrelcina and the fiftieth anniversary of that holy man's death. 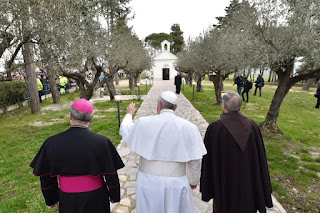 Upon his arrival, at approximately 8:00am local time, in the Square located beside the Piana Romana Liturgical Hall, the Pope was welcomed by the Archbishop of Benevento, His Excellency, Felice Accrocca, and by the Mayor of Pietrelcina, Mister Domenico Masone. 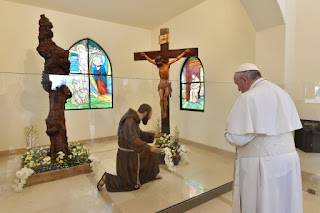 The Holy Father paused briefly to pray in the Chapel of Saint Francis located in front of the elm of the stigmata.  Then, at 8:15am, in the Square outside the Liturgical Hall, the Pope met with the faithful. 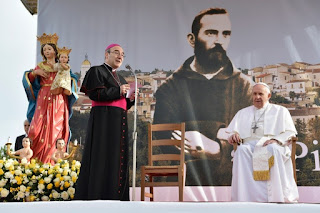 Following a few words of greeting offered by the Archbishop, Pope Francis shared his speech. 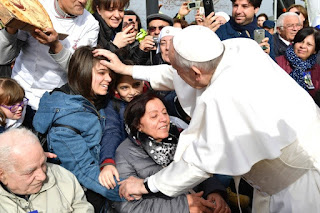 When he was finished, the Holy Father greeted the members of the Capuchin Community and some of the faithful.  Then, at approximately 9:00am local time, he departed aboard the helicopter and continued his voyage to San Giovanni Rotondo. 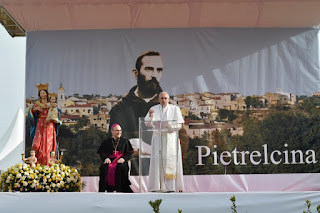 I am pleased to be here in this countryside, where Francesco Forgione was born and began his long and fruitful human and spiritual life.  In this community he tempered his own humanity, learned to pray and to recognize the Lord's flesh in the poor, until he grew in the practice of following in the footsteps of Christ and asked to be admitted to the Capuchin Friars Minor, where he became known as Padre Pio of Pietrelcina.  It was here that he began to experience the maternity of the Church, of whom he was always a devoted son.  He loved the Church; he loved the Church even with all her problems, with all her woes, with all our sins.  We are all sinners, we are ashamed of ourselves, but the Spirit of God has gathered us together in this Church which is holy.  And he loved the holy Church and the sinful children of the Church, all of them.  This was Saint Pio.  Here he used to meditate intensely on the mystery of God who loved us to the point of giving Himself for us (cf Gal 2:20).  Remembering this holy disciple of Saint Francis with esteem and affection, I cordially greet all of you his fellow citizens, as well as your Pastor and the Mayor of your city.  I also greet the Pastor of your diocese, His Excellency, Felice Accrocca, the community of Capuchins and all of you who are here this morning.

We are standing today on the soil where Padre Pio lived in September 1911 in order to breathe in a little healthy air.  At that time, there were no antibiotics and diseases were often cured by returning to one's native village, to one's mother, to eat healthy things, to breathe in the air and to pray.  This was the case for him, like any other man, like a farmer.  This was his nobility.  He never denied his homeland, he never denied his origins, he never forgot his family.  In fact, at the time, he resided in his native land for health reasons.  That was not an easy time for him: he was severely tormented in his heart and he feared falling into sin, since he felt attacked by the devil.  And this gave him no peace, because the devil kept tempting him (giving him more and more temptations).  Do you belive that the devil exists? ... You are not so convinced?  I will tell your bishop to teach you ... Does the devil exist, yes or no?  (The people respond: Yes!).  And he goes, he goes everywhere, he places himself inside us, he tempts us, he torments us, he deceives us.  And he (Padre Pio), was afraid that the devil would attack him, drive him into sin.  He spoke about this with people, in letters and in person throughout the countryside: but only t the archpriest Father Salvatore Pannullo would he speak about almost everything including his desire to be enlightened (Letter 57, in Epistles I, p. 250), because he did not understand, he wanted to clarify what was happening in his soul.  He was a good man!

In those terrible moments, Padre Pio drew vial life from continual prayer and from the trust he placed in the Lord: All the ugly ghosts - he would say - that the devil is introducing into my mind disappear when I confidently abandon myself into the arms of Jesus.  This is an entire theology!  You have a problem, you are sad, you are sick: abandon yourself in the arms of Jesus.  And this is what he did.  He loved Jesus and he entrusted himself to Him.  He wrote to the Minister Provincial, saying that his heart felt attracted to a superior force before being united to Him sacramentally in the morning.  And this hunger and thirst, rather than remaining satisfied, after having received it, grew more and more (Letter 31, in Epistle I, page 217).  Padre Pio immersed himself in prayer in order to adhere to the divine plans.  Through the celebration of the Mass, which constituted the heart of every one of his days and the fullness of his spirituality, he reached a high level of union with the Lord.  In this period, he received special mystical gifts from above which preceded the manifestation of the signs of Christ's passion in his flesh.

Dear brothers and sisters of Pietrelcina and of the dioceses of Benevento, you count Saint Pio among the most beautiful and luminous figures of your people.  This humble Capuchin brother amazed the world with his life devoted to prayer and to patiently listening to his brothers; upon those sufferings he poured out the charity of Christ as a soothing balm.  By imitating his heroic example and his virtue, you too can become instruments of God's love, of Jesus' love for those who are weak.  At the same time, considering his unconditional fidelity to the Church, you will bear witness to communion, since only communion - that is always being united, in peace among ourselves, communion among us - can we build and construct.  A country that fights every day cannot grow, there can be no growth; people are scared.  Such a country is sick and sad.  However a country where people seek peace, where everyone loves each other - more or less, that is - at least that they don't wish ill for others, such a country, even if it is small, can grow and grow and grow, getting larger and larger and stronger and stronger.

Please don't waste time fighting among yourselves.  This doesn't accomplish anything.  It will never help you to grow!  It will never help you to go on.  Let us think about a child who is crying, crying, crying.  And when the mother puts him on the floor and he begins to crawl, he cries, cries ... and he returns to the cradle.  I ask you: will that baby ever be able to walk?  No, because he remains in his cradle!  If a friend of yours fights, fights, fights, will he ever be able to grow?  No, because he is constantly devoting all his energy to fighting.  Please: among yourselves, let there be communion among you.  And if any one of you should be tempted to gossip about another one, bite your tongue.  It will be good for you, good for your soul, because your tongue will swell up, but it will be good for you; and it will be good for your fellow citizens.  Give your testimony of communion.  I hope that this territory will be able to draw new life from the teachings of Padre Pio's life especially in times of difficulty such as these, while our population is progressively declining and growing older because many young people are forced to go elsewhere to look for work.  Migration among young people is a problem.  Pray to Our Lady, ask her to give you the grace you need so that young people can find work here, among you, close to their families, and that they won't be forced to go elsewhere in search of another way, and your area of the country will end up going down, down, down.  The population is growing older, but this is a treasure, the elderly are a treasure!  Please don't marginalize the elderly.  We should never marginalize the elderly, no.  The elderly are the source of wisdom.  And may the elderly learn to speak with young people, and may young people learn to speak with the elderly.  They have the wisdom of their country, the elderly.  When I arrived, I was very happy to meet one person who is 99 years old, and a young girl of 97.  This is beautiful!  These people are your wisdom!  Speak with them.  May they be protagonists of the growth of this country.  The intercession of your Holy fellow citizen will sustain your efforts to combine your strengths, in order to offer above all to younger generations concrete prospectives for a future of hope.  Don't miss an opportunity to pay prompt attention and to tenderly care for the elderly - as I have said - they are the heritage of a particular community.  At some point, I would love to see the Nobel prize won, just once, by an elderly person who has helped humanity to remember.

I encourage all of you to guard as a precious treasure the Christian and priestly testimony of Saint Pio di Pietrelcina: may it be for each of you an incentive to live your lives to the full, in the style of the Beatitudes and with the works of mercy.  May the Virgin Mary, who you venerate with the title of Our Lady of Freedom, help you to walk with joy on the path to holiness.  And please, pray for me, because I need your prayers.  Thank you!