General Audience on the Eucharistic Prayer

This morning's General Audience began at 9:30am in the Paul VI Hall.  The Holy Father, Pope Francis met there with groups of pilgrims and the faithful from Italy and from every corner of the world.  The faithful and pilgrims who could not find room inside the Paul VI Hall were able to follow the Audience from inside Saint Peter's Basilica and His Holiness went to the Basilica after the Audience to greet the pilgrims there.

After summarizing his catechesis in various languages, the Holy Father offered particular greetings to each group of the faithful in attendance.  He then called for participation in the 24 Hours for the Lord and offered greetings to those who are participating in the Winter Paralympic Games in PyeongChang. 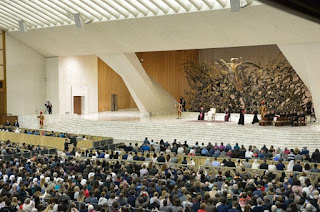 We continue the catechesis on the Mass and with this catechesis we focus on the Eucharistic Prayer.  When the rite of presenting the bread and wine has concluded, the Eucharistic Prayer - which qualifies the celebration of the Mass and constitutes the centra moment of the Mass begins.  The Eucharistic Prayer corresponds to what Jesus himself did while he was at table with the Apostles in the Last Supper, when he gave thanks over the bread and then over the chalice filled with wine (cf Mt 26:27; Mk 14:23; Lk 22:17, 19; and 1 Cor 11:24): his thanksgiving still lives on in every one of our Eucharistic celebrations, associating us with his saving sacrifice.

In this solemn prayer - the Eucharistic Prayer is solemn - the Church expresses that which she accomplishes as she celebrates the Eucharist and the reason why she celebrates, which is to say that she enters into communion with Christ who is truly present in the consecrated bread and wine.  After inviting the people to lift up their hearts to the Lord and to give him thanks, the priest pronounces the Prayer aloud, on behalf of all those who are present, addressing the Father through Jesus Christ in the Holy Spirit.  The significance of this Prayer is that the entire assembly of the faithful unites itself with Christ in magnifying the great works of God and in offering the sacrifice (General Instruction of the Roman Missal, 78).  And in order to be united, we must understand.  For this reason, the Church desired to celebrate the Mass in the language that the people could understand, in order that each person could be united in this praise and this great prayer along with the priest.  In truth, the sacrifice of Christ and the sacrifice of the Eucharist are the same sacrifice (Catechism of the Catholic Church, 1367).

There are various formulas for the Eucharistic Prayer in the Missal, all of them constitute characteristic elements which I would like to recall now (cf GIRM, 79; Catechism, 1352-1354).  They are all beautiful.  First of all, there is the Preface which is a word of thanks for God's gifts, especially for having sent his Son as our Saviour.  The Preface concludes with the acclamation of the Sanctus (Holy, Holy ...) which is normally sung.  It is beautiful to be able to sing the Sanctus: Holy, Holy, Holy Lord.  It is good to sing it.  The entire assembly unites its voice to those of the angels and the saints in praising and glorifying God.

Then there is the invocation of the Spirit who consecrates bread and wine through his power.  We call upon the Spirit, asking that he would come, so that Jesus can be found in the bread and wine.  The action of the Holy Spirit and the power of the words of Jesus spoken by the priest, make his Body and Blood truly present under the species of bread and wine, his sacrifice offered on the cross once for all time (cf Catechism, 1375).  Jesus was very clear about this.  We have heard how in the beginning, Saint Paul recalled the words of Jesus: This is my body, this is my blood.  This is my blood, this is my body.  It was Jesus himself who said this.  We should not create strange thoughts: But, how can this be ... It is Jesus' body; and that's it!  Faith: faith comes to our aid; through an act of faith, we believe that it is the body and blood of Jesus.  This is the mystery of faith, like we say after the consecration.  The priest says: The mystery of faith and we respond with an acclamation.  Celebrating the memorial of the death and resurrection of the Lord, while we await his glorious return, the Church offers to the Father the sacrifice that reconciles heaven and earth: she offers the Pascal sacrifice of Christ offering herself with Him and asking, by virtue of the Holy Spirit, to become in Christ one body and one spirit (Eucharistic Prayer III; cf Sacrosanctum Concilium, 48; GIRM, 79ff).  The Church seeks to unite herself with Christ and to become one body and one spirit with the Lord.  This is the grace and the fruit of sacramental Communion: nourishing ourselves with the Body of Christ in order that we who eat this Body may become his living body in the world today.

This is the mystery of communion, the Church unites herself to the offering of Christ and to his intercession and in that light, in the catacombs, the Church is often portrayed as a woman in prayer, with her arms wide open, in an attitude of prayer like Christ himself stretched his arms wide open on the cross, so that through him, with him and in him, she can offer herself and intercede for all mankind (Catechism, 1368).  The Church present is at prayer.  It is beautiful to think that the Church now, is at prayer.  There is a passage in the Book of the Acts of the Apostles that speaks of the moment when Peter was in prison, the Christian community was saying: We prayed incessantly for him.  The Church that is present, the Church is at prayer.  And when we go to Mass in order to do this, we are the Church at prayer.

The Eucharistic Prayer asks God to gather all his children in the perfection of love, in union with the Pope and the Bishop, mentioning them by name, a sign that we are celebrating in communion with the universal Church and with the particular church.  The supplication, like the offering, is presented to God for all the members of the Church, living and deceased, in anticipation of the blessed hope of sharing an eternal heavenly inheritance, along with the Blessed Virgin Mary (cf Catechism, 1369-1371).  No one and nothing is forgotten in the Eucharistic Prayer, but everything is brought back to God, as the doxology that concludes it recalls.  No one is forgotten.  And if I have some persons, relatives, friends who are in need or who have passed from this word to the next,  I can name them at this moment, inwardly and in silence or I can write the name and speak it aloud. Father, how much do I have to pay for my name to be spoken there? - Nothing.  Do you understand this?  Nothing!  The Mass cannot be paid for.  The Mass is Christ's sacrifice, which is free.  Redemption is free.  If you want to make an offering, do so, but there is no price.  It is important that you understand this.

This codified form of prayer, perhaps it can feel a bit far away - it is true, it is an ancient formula - but, if we understand it's significance well, we can surely participate better.  In fact, it expresses everything that we do in the Eucharistic celebration; and it also teaches us to cultivate three attitudes that should never be lacking in any of Jesus' disciples.  The three attitudes are: first, learn to give thanks, always and everywhere, and not only on certain occasions, when everything is going well; second, make our lives a gift of love, freely given; third, work toward building up tangible communion, in the Church and with everyone.  Therefore, this central prayer of the Church teaches us, little by little, to make of our lives a eucharist, an act of thanksgiving.

The Holy Father's catechesis was then summarized in various languages and His Holiness offered greetings to each group of pilgrims in attendance.  To English-speaking pilgrims, he said:

I greet the English-speaking pilgrims and visitors taking part in today’s Audience, particularly those from England, Lithuania, Vietnam and the United States of America. With prayerful good wishes that this Lent will be a time of grace and spiritual renewal for you and your families, I invoke upon all of you joy and peace in our Lord Jesus Christ. God bless you!

After having offered his greetings to each group of pilgrims in attendance, the Holy Father invited everyone to participate in the penitential liturgy known as 24 Hours for the Lord.

Next Friday, in the Basilica of Saint Peter, I will celebrate the penitential liturgy for the traditional 24 Hours for the Lord.

I hope that our churches will be able to remain open in order to welcome those who wish to prepare for Easter by celebrating the Sacrament of Reconciliation, and in this way experiencing the mercy of God.

The Pope then addressed a greeting to all those who will be participating in the Winter Paralympic Games which begin in PyeongChang (South Korea) later this week:

In two days' time, the Winter Paralympic Games will begin in the city of PyeongChang, in South Korea, which also recently hosted the Olympiad.  Those athletes demonstrated how sports can build bridges between countries in conflict and provide valuable contributions toward the prospects of peace between all people.  Even more so, the Paralympic Games attest to the fact that through sports, it is possible to overcome our own disabilities.  The athletes and the paralympic athletes are examples for everyone of courage, constancy and tenacity in not allowing themselves to be overcome by limitations.  Sports therefore appear to be a great school of inclusion, but also of inspiration for one's own life and for being committed to transforming society.

I extend my greetings to the International Paralympic Committee, to all the athletes, to the authorities and to the Korean people.  I assure you all of my prayers that this even may provide days of peace and joy for everyone.

Pope Francis then went to the Basilica of Saint Peter to greet the pilgrims who were gathered there, watching the General Audience on giant screens.  When he arrived, he greeted the pilgrims:

Good morning to all of you!  Today, we thought it was going to rain, but who can understand Rome?  The climate in Rome is like that, and for this reason, we gathered you here and not in the Square ... Thank yo for your patience and for your prayers.  I know that you are praying for me!  Is that true?  No?  It isn't true?  Yes, it is true!  Continue praying for me.

Now, before I come to greet you all, I will give you my blessing, for you, for your families and for the things you hold in your hearts.  But first, let us pray to Our Lady all together.