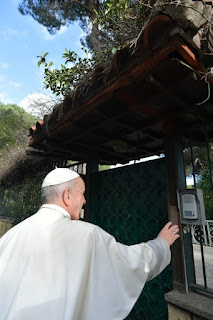 At 4:00pm this afternoon (10:00am EST), along with Monsignor Rino Fisichella, President of the Pontifical Council for the New Evangelization, the Holy Father, Pope Francis left the Vatican and went, without any prior notice, to the Eur neighbourhood in Rome where the Casa di Leda - a residence which was confiscated from organized crime and now serves as a protective home for female prisoners and their children.  This structure is the first of its kind in Italy.  The area Director, Doctor Lillo Di Mauro told the Pope about the efforts that have been expended in order to set up the structure, the importance of giving back to society by providing this residential space and at the same time, developing a project aimed at promoting civility and greater humanity.

Your Holiness, dear Father, we are the invisibles.  With these words, Doctor Di Mauro welcomed the Pope: We are some of the thousands of boys and girls, children and grandchildren who are hidden in Italian prisons where we live or where we go to visit with them ... in order to defend the dignity of our imprisoned parents who tell us lies and lead us to believe them and enter into colleges or the work force.  We are searched, violated in our intimacy by the hands of unknown adults, who rob us of our stuffed toys, the poor toys that are our friends; they take them from us, they open them, they check them and sometimes they even take off our panties in order to verify that our mothers have not hidden drugs.

We are fragile flowers, Doctor Di Mauro continued, in the desert of bureaucracy and security measures, amidst the indifference of adults who have been alienated by cruel and violent work.  For many of them, we are statistics: 4,500 children whose mothers have been imprisoned, approximately 90 thousand of us have a father in prison.  Our parents even sometimes wonder about us.

Not to mention that our fathers sometimes work in fantastic and distant countries and our mothers are queens.  In order to defend ourselves we become aggressive and intractable, but we are not bad people; they are people who we see and who want to see us that way: We are children of prisoners. 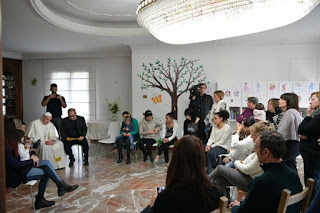 Pope Francis was welcomed with great amazement by the mothers, their children and the staff who - at the time of his arrival - were present within the building.  The home has been operated by the Cecilia Onlus social cooperative since March 2017 and now houses mothers who have been detained for minor offences, those whose parental abilities are recognized and who can therefore continue serving their detentions in company with their children within a family environment.

At the present moment, there are five young mothers in residence, aged between 25 and 30 years, some are Romans, some from Egypt and one who is Italian, each with their own children.  Besides the mothers, there are also employees, educators and volunteers from the A Roma Insieme Association.  Also involved in project are realities of the PID: the Disagio Sociale Onlus Emergency Intervention and the Ain Karim Association.  Also present within the structure are members of the so-called Put to the test group, defendants who are accused of minor crimes who are not required to be retained but who fulfill the terms of their sentences by providing useful work for the community and within the structure. 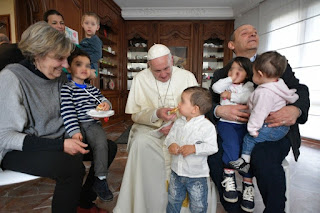 The Holy Father had an opportunity to exchange some words with the mothers and with the children who are working at the home; he played with the children, offered each of them a large Easter egg, listened with great joy to the children who invited him to share a snack with them.  The mothers offered the Pope a small gift which had been produced through the simple acts and various tasks that they carry out at the home, while they told him about the opportunity that has been given to them to raise their children in spite of the many difficulties they face.  In fact, staying at this home allows the mothers to accompany and to collect their children from school, and to engage in various activities which allow them to learn job skills in view of future re-integration to the world of work and society.

After having left some gifts with the young mothers - including a signed parchment commemorating his visit - left the home at 5:00pm and returned to Casa Santa Marta.
at 15:05