The Passion of the Lord at the Vatican

At 5:00pm local time today (11:00am EDT), the Holy Father, Pope Francis presided over the celebration of the Passion of the Lord inside the Vatican Basilica. 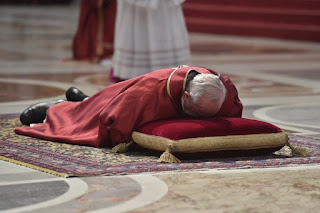 During the Liturgy of the Word, John's account of the Passion was read aloud and then the Preacher of the Papal Household, Father Raniero Cantalamessa, OFM Cap. shared his reflection. 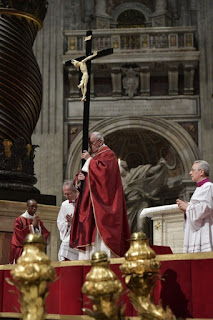 The Liturgy of the Passion continued with the Prayers of the Faithful and the adoration of the Holy Cross, and concluded with the distribution of Holy Communion. 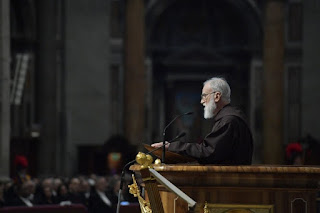 He who saw it has borne witness
Homily of Fr. Raniero Cantalamessa, OFM, Cap.
Preacher of the Papal Household
Commemoration of the Death of the Lord

When they came to Jesus and saw that he was already dead, they did not break his legs. But one of the soldiers pierced his side with a spear, and at once there came out blood and water. He who saw it has borne witness - his testimony is true, and he knows that he tells the truth - that you also may believe. (Jn 19:33-35).

No one could convince us that this solemn attestation does not correspond to historical truth, that the one who says he was there and saw it was really not there and did not see it. What is at stake, in this case, is the honesty of the author. On Calvary, at the foot of the cross, was the mother of Jesus and next to her, the disciple whom Jesus loved. We have the testimony of an eye-witness!

He saw not only what was happening as everyone looked on, but in the light of the Holy Spirit after Passover he also saw the meaning of what happened: in this moment the true Lamb of God was sacrificed and the meaning of the ancient Passover was fulfilled; Christ on the cross was the new temple of God from whose side, as the prophet Ezekiel predicted (Ez 47:1ff), flowed the water of life; the spirit that he gave up at the moment of death began the new creation, just as in the beginning the Spirit of God, hovering over the waters, had transformed the chaos in the cosmos. John understood the meaning of Jesus’ last words: It is fulfilled (cf Jn 19:30).

But why, we can ask ourselves, this unbounded concentration on the significance of the cross of Christ? Why is the Crucified One omnipresent in our churches, on altars, and in every place frequented by Christians? Someone has suggested, as a key to understanding the Christian mystery, that God reveals himself sub contraria specie, under a form contrary to what he is in reality: he reveals his power in weakness, his wisdom in foolishness, his riches in poverty.

This key, however, does not apply to the cross. On the cross God reveals himself sub propria specie, he reveals himself as he really is, in his most intimate and truest reality. God is love, John writes (1 Jn 4:10), oblative love, a love that consists in self-giving, and only on the cross does God’s infinite capacity for self-gift manifest the length to which it will go. Having loved his own who were in the world, he loved them to the end (Jn 13:1); “God so loved the world that he gave - meaning to death! -his only Son (Jn 3:16); the Son of God . . . loved me and gave himself for me (Gal 2:20).

In this year in which the Church will hold a Synod on Young People and aims to have them as the centre of pastoral concern, the presence on Calvary of the disciple that Jesus loved holds a special message. We have every reason to believe that John joined Jesus when he was still quite young. It was a real falling in love. Everything else suddenly took second place. It was a personal, existential encounter. Whereas at the centre of Paul’s thinking is the work of Jesus — his paschal mystery of death and resurrection — at the centre of John’s thinking is the being, the person, of Jesus. This is the source of all the I am statements with divine resonance that punctuate his Gospel: I am the way, the truth, and the life; I am the door; simply I am.

John was almost certainly one of John the Baptist’s two disciples who, when Jesus appeared on the scene, followed him. When they asked, Rabbi, where are you staying? Jesus answered, Come and see. They came and saw where he was staying; and they stayed with him that day, for it was about the tenth hour (cf Jn 1:35-39). That hour decided the course of John’s life, and he never forgot it.

It is appropriate during this year that we make an effort to discover together with young people what Christ expects from them, what they can offer the Church and society. The most important thing, however, is something else: it is to help young people understand what Jesus has to offer them. John discovered it while staying with him: fullness of joy and abundant life. Let us do this in such a way that, in all the speeches about young people and to young people, the heartfelt invitation of the Holy Father in Evangelii gaudium will resonate as an undercurrent:


I invite all Christians, everywhere, at this very moment, to a renewed personal encounter with Jesus Christ, or at least an openness to letting him encounter them; I ask all of you to do this unfailingly each day. No one should think that this invitation is not meant for him or her, since no one is excluded from the joy brought by the Lord” (EG, 3).

To encounter Christ personally is still possible today because he is risen; he is a living person, not a personage. Everything is possible after this personal encounter; without it nothing will be stable or enduring.

Besides the example of his life, the evangelist John has also left a written message to young people. In his First Letter we read these moving words from an elder to the young people in the churches he founded:


I write to you, young men, because you are strong, and the word of God abides in you, and you have overcome the evil one. Do not love the world or the things in the world  (1 Jn 2:14-15).

The world that we must not love and to which we should not be conformed as we know, is not the world created and loved by God or the people in the world whom we must always go out to meet, especially the poor and those at the lowest level of society. Blending in with this world of suffering and marginalization is, paradoxically, the best way of separating ourselves from the world because it means going in the direction from which the world flees as much as it can. It means separating ourselves from the very principle that rules the world, self-centredness.

No, the world we must not love is something else; it is the world as it has become under the dominion of Satan and sin, the spirit of the air, as Saint Paul calls it (cf Eph 2:1-2). It plays a decisive role in public opinion, and today it is literally a spirit of the air because it is spreads itself in infinite ways electronically through airwaves. One famous exegete writes that this spirit is so intense and powerful that no individual can escape it. It serves as a norm and is taken for granted. To act, think or speak against this spirit is regarded as non-sensical or even as wrong and criminal. It is ‘in’ this spirit that men encounter the world and affairs, which means they accept the world as this spirit presents it to them (Heinrich Schlier, Principalities and Powers in the New Testament (New York: Herder and Herder, 1961), pp. 31-32).

This is what we call an adaptation to the spirit of the age, conformity. One great believing poet from the last century, T. S. Eliot, has written three verses that say more than whole books: In a world of fugitives / The person taking the opposite direction / Will appear to run away (T. S. Eliot, Family Reunion, Part II, sc. 2, in The Complete Plays of T. S. Eliot (New York: Houghton Mifflin Harcourt, 2014), p.110).

Dear young Christians, if you will allow an old man like John to address you directly, I would exhort you: be those who take the opposite direction! Have the courage to go against the stream! The opposite direction for us is not a place but a person; it is Jesus, our friend and redeemer.

A task and a mission are particularly entrusted to you: to rescue human love from the tragic drift in which it had ended up: love that is no longer a gift of self but only the possession—often violent and tyrannical—of another. God revealed himself on the cross as agape, the love that gives itself.


Eros and agape — ascending love and descending love — can never be completely separated. . . . Biblical faith does not set up a parallel universe, or one opposed to that primordial human phenomenon which is love, but rather accepts the whole man; it intervenes in his search for love in order to purify it and to reveal new dimensions of it (DCE, 7-8).

It is not a question of renouncing the joys of love, attraction, and eros but of knowing how to unite eros and agape in the desire for another, the ability to give oneself to the other, recalling what Saint Paul refers to as a saying of Jesus: It is more blessed to give than to receive (Acts 20:35).

This ability, however, does not come about in one day. It is necessary to prepare yourselves to make a total gift of self to another creature in marriage, or to God in consecrated life, beginning by making a gift of your time, of your smile, and of this period of your lives in the family, in the parish, and in volunteer work. This is what so many of you are already quietly doing.

On the cross Jesus not only gave us an example of self-giving love carried to the extreme; he also merited the grace for us to be able to bring it to pass, to some extent, in our lives. The water and blood that flowed from his side comes to us today in the sacraments of the Church, in God’s word, and even in just looking at the Crucified One in faith. One last thing John saw prophetically at the cross: men and women of every time and place who were turning their gaze to the one who was pieced and who wept tears of repentance and of consolation (cf Jn 19:37 and Zac 12:10). Let us join them in the liturgical actions that will follow.
(Original text in Italian; English Translation by Marsha Daigle Williamson)