General Audience on the Our Father

This morning's General Audience began at 9:25am (4:25am EDT) in Saint Peter's Square, where the Holy Father, Pope Francis met with groups of pilgrims and the faithful from Italy and from every corner of the world.

In his speech, the Pope continued his catechesis on the Mass, adding a third meditation on the Liturgy of the Eucharist: the Our Father and the Fractioning Rite (breaking of bread). 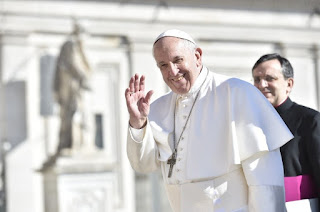 We continue with the Catechesis on the Mass.  At the Last Supper, after Jesus took the bread and the chalice of wine, and after he had given thanks to God, we know that he broke the bread.  This action corresponds, in the Eucharistic liturgy at the Mass, to the fractioning of the eucharistic bread, which is preceded by the prayer that the Lord has taught us, the one we call the Our Father.

This is the beginning of the Communion Rite, which prolongs by the praise and supplication offered in the Eucharistic prayer through the communal recitation of the Our Father.  This is not one of many Christian prayers but the prayer of the children of God: it is the great prayer that Jesus taught us.  In fact this prayer, which is presented to us on the day of our Baptism resounds within us with the same sentiments that were in Christ Jesus.  When we pray the Our Father, we pray like Jesus prayed.  This is the prayer that Jesus offered, and he taught it to us; when the disciples said to him: Master, teach us to pray like you pray.  Jesus used to pray like this.  It is beautiful to pray like Jesus prayed!  Instructed by his divine teachings, we dare to turn to God and call upon him as Father, since we are reborn as his children through water and the Holy Spirit (cf Eph 1:5).  In truth, no one can call God Abba without being inspired by God himself, without the inspiration of the Holy Spirit, as Saint Paul has taught us (cf Rom 8:15).  We must think: ono one can call God Father without being inspired to do so by the Spirit.  How often people say the Our Father, but don't really know what they are saying.  Yes, he is our Father, but do you feel that when you say Father, He is the Father, your Father, the Father of all humanity, the Father of Jesus Christ?  Do you have a relationship with this Father?  When we pray the Our Father, we connect with our Father who loves us, but it is the Spirit who provides this connection, this sentiment of being children of God.

What better prayer can there be than the one that Jesus taught to bring us into sacramental Communion with him?  In addition to the Mass, the Our Father is prayed, in the morning and at night, as part of Lauds (Morning Prayer) and Vespers (Evening Prayer); in this way, a filial attitude toward God and a sentiment of fraternity with our neighbour both contribute to giving our days a Christian format.

In the Lord's Prayer - in the Our Father - we ask for our daily bread, in which we see a particular reference to the Eucharistic Bread, which we need in order to live as children of God.  We also beg for the forgiveness of our sins, and to be worthy of receiving God's forgiveness as we forgive those who have sinned against us.  This is not easy.  To forgive a person who has offended us is not easy; it is a grace that we need to ask for: Lord, teach me to forgive as you have forgiven me.  This is a grace.  With our strength, we cannot do it: forgiveness is a grace we receive from the Holy Spirit.  Therefore, while we open our hearts to God, the Our Father also disposes us to fraternal love.  Finally, we call on God once again to free us from the evil, that separates us from Him and divides us from our brothers.  We are well aware that these requests are very suitable in preparation for the reception of holy Communion (cf General Instruction of the Roman Missal, 81).

In effect, what we ask for in the Our Father is prolonged in the prayer offered by the priest who, in the name of everyone present, begs: Deliver us, O Lord, from every evil; grant peace in our day.  And then he receives a kind of seal in the rite of peace: first of all, we call upon Christ for the gift of his peace (cf Jn 14:27) - which is very different from the peace that the world gives - asking that He may help the Church to grow in unity and peace - according to his will; then , with a concrete gesture that is exchanged among us, we express ecclesial communion and mutual love, before receiving the Sacrament of communion (GIRM, 82).  In the Roman rite, the exchange of a sign of peace, which since ancient times has preceded Communion, is aimed at creating and restoring Eucharistic communion.  According to Saint Paul's warning, it is not possible to be in communion with the one Bread that makes us one Body in Christ without recognizing ourselves as partakers in fraternal love (cf 1 Cor 10:16-17; 11:29).  The peace of Christ cannot take root in a heart that is incapable of living fraternally and of reassembling fraternity after having wounded it.  Peace is the gift of the Lord: He give us the grace of forgiving those who have offended us.

The gesture of peace is followed by the breaking of Bread, which from the time of the apostles has given its name to the entire celebration of the Eucharist (cf GIRM, 83; Catechism of the Catholic Church, 1329).  Carried out by Jesus during the Last Supper, the breaking of Bread is the revealing gesture that allowed the disciples to recognize him after his resurrection.  We remember the disciples on the road to Emmaus who, while speaking about their encounter with the risen Christ, spoke about how they had recognized him in the breaking of the bread (cf Lk 24:30-31; 35).

The breaking of the Eucharistic bread is accompanied by the invocation of the Lamb of God, an image with which John the Baptist had indicated in Jesus the one who would take away the sins of the world (Jn 1:29).  The biblical image of the lamb speaks of redemption (cf Ex 12:1-14; Is 53:7; 1 Pt 1:19; Rev 7:14).  In the Eucharistic bread, broken for the life of the world, the assembly at prayer recognizes the true Lamb of God, who is the Redeemer Christ, and begs him: Have mercy on us ... grant us peace.

Have mercy on us, and grant us peace, are invocations that, from the prayer of the Our Father to the breaking of the Bread, help us to open our minds to participating in the Eucharistic banquet, the source of communion with God and with our brothers and sisters.

The Holy Father's catechesis was then summarized in various languages and His Holiness offered greetings to each group of pilgrims in attendance.  To English-speaking pilgrims, he said:

I greet the English-speaking pilgrims and visitors taking part in today’s Audience, particularly those from England, Ireland, Norway, Australia, China, Indonesia and the United States of America. With prayerful good wishes that this Lent will be a time of grace and spiritual renewal for you and your families, I invoke upon all of you joy and peace in our Lord Jesus Christ. God bless you!
at 08:20