Founder of the Knights of Columbus soon to be Blessed 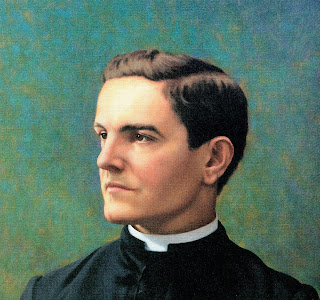 Earlier today in Rome, Pope Francis approved the promulgation of a decree recognizing a miracle attributed to the intercession of the founder of the Knights of Columbus, Venerable Father Michael J. McGivney, a Connecticut priest who served his flock during the pandemic of 1890, before himself becoming ill and dying of pneumonia.

The Pope’s action means that Father McGivney can be declared Blessed, the step just prior to sainthood. An additional miracle attributed to Father McGivney’s intercession will be required for his canonization as a saint.

McGivney is best known for founding the Knights of Columbus in 1882. Nearly a century before the Second Vatican Council, his prescient vision empowered the laity to serve the Church and their neighbours in a new way. Today, the Knights of Columbus is one of the largest Catholic organizations in the world with 2 million members in North and Latin America, the Caribbean, Asia, and Europe.

The miracle recognized as coming through Father McGivney’s intercession involved an unborn child in the United States who in 2015 was healed in utero of a life-threatening condition after prayers by his family to Father McGivney.

A date will soon be set for the beatification Mass, which will take place in Connecticut. It will include the reading of an apostolic letter from the Holy Father and the bestowing of the title Blessed on Father McGivney.

Earlier this year, in an address to the Knights of Columbus Board of Directors, Pope Francis said the organization has been faithful to the vision of your founder, Venerable Michael McGivney, who was inspired by the principles of Christian charity and fraternity to assist those most in need.

Father McGivney has inspired generations of Catholic men to roll up their sleeves and put their faith into action, Supreme Knight Carl A. Anderson said. He was decades ahead of his time in giving the laity an important role within the Church. Today, his spirit continues to shape the extraordinary charitable work of Knights as they continue to serve those on the margins of society as he served widows and orphans in the 1880s. Father McGivney also remains an important role model for parish priests around the world and left us a transformative legacy of effective cooperation between the laity and clergy.

Born of Irish immigrant parents in 1852 in Waterbury, Connecticut, Father McGivney was a central figure in the dramatic growth of the Church in the United States in the late 19th century. Ordained in Baltimore in 1877, he ministered to a heavily Irish-American and immigrant community in the then-Diocese of Hartford. At a time of anti-Catholic sentiment, he worked tirelessly to keep his flock close to the faith in part by finding practical solutions to their many problems – spiritual and temporal alike. With a group of the leading Catholic men of New Haven, he founded the Knights of Columbus in 1882 at Saint Mary’s Church to provide spiritual support for Catholic men and financial resources for families that had suffered the loss of their breadwinner.

The fledgling group soon became a major force in the areas of evangelization, charity, racial integration, and the defence of religious freedom.

Father McGivney spent his entire priesthood in parish ministry and died of pneumonia on August 14, 1890— two days after his 38th birthday – after falling ill amid a pandemic. Recent scientific evidence indicates that that pandemic – like the current one – may have been caused by a coronavirus.

Known by his contemporaries for his devotion to the faith and his embodiment of the characteristics of the Good Samaritan, his cause for sainthood was opened in the Archdiocese of Hartford in 1997. Saint John Paul II – who was pope at that time – lauded Father McGivney’s principles, stating in 2003, In fidelity to the vision of Father McGivney, may you continue to seek new ways of being a leaven of the Gospel in the world and a spiritual force for the renewal of the Church in holiness, unity and truth.

In March 2008, he was declared a Venerable Servant of God by Pope Benedict XVI, who during his visit to Saint Patrick’s Cathedral cited the remarkable accomplishment of that exemplary American priest, the Venerable Michael McGivney, whose vision and zeal led to the establishment of the Knights of Columbus.

Two recent books also tell the story of Father McGivney and his legacy: Parish Priest (2006), his biography; and the The Knights of Columbus: An Illustrated History (2020).
at 08:38