General Audience on the mystery of Creation

This morning's General Audience began at 9:30am inside the Library at the Vatican Apostolic Palace.

In his speech, the Pope continued the cycle of catechesis on prayer, adding his medication on the theme: The mystery of Creation (Ps 8: 4-5, 10). 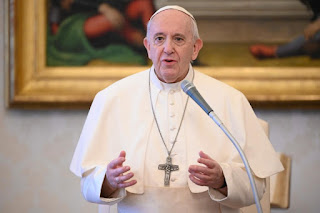 Let us continue the catechesis on prayer, meditating on the mystery of Creation. Life, the simple fact that we exist, opens man's heart to prayer.

The first page of the Bible resembles a great thanksgiving hymn. The story of Creation is punctuated by refrains, where the goodness and beauty of everything that exists is continually reaffirmed. God, with his word, calls to life, and everything is created. With a word, he separates light from darkness, alternates day and night, alternates the seasons, opens a palette of colours with the variety of plants and animals. In this overflowing forest that rapidly defeats chaos, man appears last. And this apparition provokes an excess of exultation which amplifies satisfaction and joy: God saw what he had done, and behold, it was a very good thing (Gen 1: 31). A good thing, but also something beautiful: you can see the beauty of all Creation!

The beauty and mystery of Creation generate in man's heart the first movement that arouses prayer (cf Catechism of the Catholic Church, 2566). Thus reads the eighth Psalm, which we heard at the beginning of this Audience: "When I see your skies, the work of your fingers, the moon and the stars that you have fixed, what is man that you remember him, the son man, why do you care?  (Ps 8: 4-5). The person praying contemplates the mystery of existence around him, sees the starry sky above him - and all that astrophysics shows us today in all its immensity - and he wonders what design of love must be behind a work that is so powerful! ... And, in this boundless vastness, what is man?  Almost nothing, says another Psalm (cf Ps 89: 48): a being who is born, a being who dies, a very fragile creature. Yet throughout the universe, the human being is the only creature aware of such a profusion of beauty. A small being who is born, dies, exists today and is gone tomorrow, one who is the only one aware of this beauty. We are aware of this beauty!

Man's prayer is closely linked with the feeling of amazement. The size of man is infinitesimal when compared to the size of the universe. His greatest achievements seem very small ... But man is nothing. In prayer a feeling of mercy is asserted, overbearing. Nothing exists by chance: the secret of the universe lies in a benevolent gaze that someone meets in our eyes. The Psalm states that we are made little less than a God, we are crowned with glory and honour (cf Ps 8: 6). The relationship with God is the greatness of man: his enthronement. By nature we are almost nothing, small but by vocation, by call we are the children of the great King!

This is an experience that many of us have had. If the story of life, with all its bitterness, sometimes risks suffocating the gift of prayer in us, the contemplation of a starry sky, a sunset, a flower ... is enough to rekindle the spark of thanksgiving. This experience is perhaps the basis of the first page of the Bible.

When the great biblical account of Creation was drawn up, the people of Israel were not going through happy days. An enemy power had occupied their land; many had been deported, and slaves were found in Mesopotamia. There was no more homeland, no temple, no social and religious life, nothing.

Yet, beginning with the great story of Creation, someone began to find reasons for thanksgiving, to praise God for existence. Prayer is the first strength of hope. You pray and hope grows, goes on. I would say that prayer opens the door to hope. Hope is there, but with my prayer I open the door. Because men of prayer guard the basic truths; they are the ones who repeat, first of all to themselves and then to all the others, that this life, despite all its efforts and its trials, despite its difficult days, is full of a grace to marvel at. And as such it must always be defended and protected.

We are all bearers of joy. Have you ever thought about this? That you are a bearer of joy? Or do you prefer to bring bad news, things that make you sad? We are all capable of bringing joy. This life is the gift that God has given us: and it is too short to consume it in sadness, in bitterness. We praise God, simply happy to exist. We look at the universe, we look at its beauties and we also look at our crosses and we say: But, you exist, you did it for us. It is necessary to feel that restlessness of the heart that leads us to thank and to praise God. We are the children of the great King, of the Creator, capable of reading his signature in all creation; that creation that we do not keep today, but in that creation there is the signature of God who created it out of love. May the Lord make us understand this more and more deeply and lead us to say thank you: and that thank you is a beautiful prayer.
Testo originale nella lingua italiana

The Holy Father's catechesis was then summarized in various languages and His Holiness offered greetings to each group of pilgrims who were following his Catechesis.  To French-speaking viewers, he said:

I am pleased to greet French-speaking people.  On the vigil of the Feast of the Ascension of the Lord, let us ask him to help us rediscover in the beauty of creation a reflection of the glory and the splendour of God!  May God bless you!

I greet the English-speaking faithful joining us through the media. As we prepare to celebrate the Ascension of the Lord, I invoke upon you and your families the peace and joy that come from the Risen Christ. May God bless you!

I cordially greet the German believers. When we look at the miracle of creation, we see the greatness of the Creator and the infinite love with which he looks at everything that has been created. The joy of nature and the praise of God help us to find fulfillment and inner peace.

I cordially greet the Spanish-speaking faithful who are following this catechesis through the media. May the risen Jesus, with the strength of his Holy Spirit, make us bearers of joy, strengthen hope within us and the certainty that love is stronger than death ... and that it always triumphs. God bless you.

Dear Portuguese-speaking faithful, I cordially greet you all, with the hope that the light of the Risen Jesus will always shine in your hearts. In this Month of Mary, let us try to pray the rosary every day, learning from Our Lady to have a contemplative look at all the events of our life. May God bless you!

I greet all Arabic speaking believers who are following this Catechesis via social media. Prayer is a human dialogue with God. In it we praise and thank him for his love for us, and in this we entrust to him our concerns and problems. We read in the book of Joshua ibn Sirakh: Look at the old generations and contemplate. Has anyone trusted in the Lord, to my shame?" (Joshua bin Sirach 2, 10). May God bless you and keep you safe from all evil!

I cordially greet all Polish people. In these days we are celebrating the hundredth anniversary of the birth of Saint John Paul II. He, a Shepherd of great faith, liked to entrust the Church and all humanity to God in prayer. Choosing the episcopal call of Totus Tuus, he also showed that in difficult times we should turn to the Mother of God who can help us and put in a good word for us. Let his life, built on deep, intense and trusting prayer, be an example for today's Christians. I bless you with all my heart.

I greet the Italian-speaking faithful. The Feast of the Ascension of the Lord, which is now approaching, offers me the opportunity to urge everyone to be generous witnesses of the Risen Christ, knowing full well that he is always with us and supports us along the way.

I address a special thought to the elderly, young people, the sick and newlyweds. Jesus Christ, ascending to heaven, leaves a message and a program for the whole Church: Go and teach all the nations ... teaching them to observe all that I have commanded you (Mt 28, 19-20). Make known the word of salvation of Christ, and witness it in daily life, both your ideal and your commitment. My blessing to all of you!
at 21:35