In his speech, the Pope continued the cycle of catechesis on prayer, adding his meditation on the theme: The prayer of the Christian (Ps 63: 2-5, 9).

After having summarized his catechesis in various languages, the Holy Father offered particular greetings to each group of the faithful. 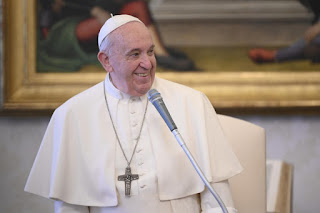 Let us take the second step today in the journey of catechesis on prayer, which we began last week.

Prayer belongs to everyone: to men of all religions, and probably also to those who profess no religion at all. Prayer arises in the secret of ourselves, in that inner place that spiritual authors often call the heart (cf Catechism of the Catholic Church, 2562-2563). Therefore, prayer is not something peripheral within us, it is not one of our secondary or marginal faculties, but it is the most intimate mystery of ourselves. It is this mystery that prays. Emotions pray, but it cannot be said that prayer is only a matter of emotion. Intelligence prays, but praying is not just an intellectual act. The body prays, but one can speak to God even in the most serious case of physical limitation. It is therefore the whole man who prays, if he prays with his heart.

Prayer is an impetus, it is an invocation that goes beyond ourselves: something that is born in the depths of our person and reaches out, because it feels the nostalgia of an encounter. That nostalgia that is more than a need, more than a necessity: it is a road. Prayer is the voice of an I groping, groping, looking for a You. The meeting between the I and the You cannot be done with calculators: it is a human encounter and many times one gropes in order to find the You that my I is looking for.

Instead, the Christian's prayer arises from a revelation: the You has not been shrouded in mystery, but it has entered into a relationship with us. Christianity is the religion that continually celebrates the manifestation of God, that is, his epiphany. The first feasts of the liturgical year are the celebration of this God who does not remain hidden, but who offers his friendship to men. God reveals his glory in the poverty of Bethlehem, in the contemplation of the Magi, in the baptism at the Jordan, in the prodigy of the wedding at Cana. John's Gospel begins with a concise statement the great hymn of the Prologue: No one has ever seen God: it is the only-begotten Son who is in the bosom of the Father, he revealed him (Jn 1:18). It was Jesus who revealed God to us.

The Christian's prayer enters into a relationship with God who has the most tender face, who does not want to instill any fear in men. This is the first characteristic of Christian prayer. If men had always been used to approaching God a little intimidated, a little frightened by this fascinating and terrible mystery, if they had become accustomed to venerating him with a servile attitude, similar to that of a subject who does not want to disrespect, instead, Christians turn to their lord, daring to call upon him confidently with the name of Father. In fact, Jesus uses another word: dad.

Christianity has banished any feudal relationship from the bond with God. In the heritage of our faith there are no expressions such as subjection, slavery or vassalage; but instead, there are words like covenant, friendship, promise, communion, closeness. In his long farewell address to the disciples, Jesus says thus: "I no longer call you servants, because the servant does not know what his master is doing; but I have called you friends, because all that I have heard from the Father I have made known to you. You did not choose me, but I chose you and I made you to go and bear fruit, fruit that will last; so that whatever you ask the Father in my name, he will grant to you (Jn 15: 15-16). But this is a blank cheque: Everything that you will ask of my Father in my name, I will grant you!

God is a friend, an ally, the groom. In prayer, a relationship of trust can be established with him, so much so that in the Our Father, Jesus taught us to ask him a series of questions. We can ask God for everything, everything; he will explain everything, he will tell us everything. It doesn't matter if we feel at fault in the relationship with God: we have not been good friends, we have not been grateful children, we have not been faithful spouses. He continues to love us. This is what Jesus definitively demonstrates at the Last Supper, when he says: This cup is the new covenant in my blood, which is poured out for you (Lk 22:20). In that gesture Jesus anticipates the mystery of the Cross ... in the Upper Room. God is a faithful ally: if men stop loving, he continues to love us, even if love should lead him to Calvary. God is always near the door of our heart and waiting for us to open the door. And sometimes he knocks on our hearts but he is never intrusive: he waits. God's patience with us is the patience of a dad, of someone who loves us so much. I would say, it is the patience of a dad and a mom together. Always close to our hearts, and when he knocks he does so with tenderness and with much love.

Let's all try to pray like this, entering into the mystery of the Covenant. To place ourselves in prayer in the merciful arms of God, to feel wrapped in that mystery of happiness that is the Trinitarian life, to feel like guests who do not deserve so much honour. And to repeat to God, in the amazement of prayer: is it possible that you only know love? He does not know hatred. He is hated, but he himself does not know hatred. He only knows love. This is the God we pray to. This is the incandescent core of every Christian prayer. The God of love, our Father who waits for us and accompanies us.
Testo originale nella lingua italiana

The Holy Father's catechesis was then summarized in various languages and His Holiness offered greetings to each group of the faithful who were following the General Audience via various media.  To French-speaking faithful, he said:

I cordially greet all French-speaking people.  When we pray, let us do our best to speak to God with confidence, like children who are speaking to their Father, chasing away all fear and all distance.  He is always close to us, we can tell him everything and we can ask him anything.  May God bless you!

I greet the English-speaking faithful joining us through the media. In this Easter season, I invoke upon you and your families the joy and strength that come from the Risen Christ. May God bless you!

I warmly greet our German-speaking friends. The many evidences of divine love are a strong invitation to us to be kind to everyone we meet, even in these times when life is perhaps making it a little more difficult for us to be together. May the Holy Spirit fill you with his love and joy.

I cordially greet the Spanish-speaking faithful who are following this catechesis through the media. I encourage you to establish that filial relationship, of friendship and trust with the Lord, asking Him for what you need for your life and, in particular, for those who are by our side and we know that they are in need, so that God, as a good Father, may make your face shine on them and grant them peace. May Our Lady of Fatima, whose memory we celebrate today, intercede for each one of you. God bless you.

I greet Portuguese-speaking listeners and, on this 13th of May, I encourage everyone to know and follow the example of the Virgin Mary. For this reason, let us try to live this month with more intense and faithful daily prayer, in particular praying the rosary, as recommended by the Church, obeying a desire repeatedly expressed in Fatima by Our Lady. Under her protection, you will see that the sufferings and afflictions of life will be more bearable. Today, I would like to be close in heart to the diocese of Leiria-Fátima, the Shrine of Our Lady. I greet all the pilgrims who are there in prayer; I greet the Cardinal Bishop, I greet everyone. All united with Our Lady, so that she may accompany us on this path of daily conversion towards Jesus. God bless you!

I salute all Arabic speaking believers who are following this interview via social media. Prayer is the way to communicate with and listen to God. In this spirit, I accepted the invitation of the Supreme Committee for Human Fraternity to dedicate tomorrow, May 14, to prayer, fasting and charity. I invite and encourage everyone to join this event. Let us unite as brothers, asking the Lord to save mankind from the pandemic, to enlighten scholars, and to give healing to those who have been afflicted. May God bless you and keep you safe from all evil!

I cordially greet all Poles. Today in the liturgy we celebrate the Memorial of Our Lady of Fatima. We return to her revelations and the message she entrusted to the world, as well as to the assassination attempt on the life of Saint John Paul II, who in his survival saw the maternal intervention of the Blessed Virgin. In our prayer, let us ask God, through the intercession of the Immaculate Heart of Mary, for peace for the world, to stop the pandemic, for a spirit of penance and for our own conversion. This Monday is the centenary of the birth of Saint John Paul II: I will celebrate Mass at the altar of his grave at 7am, which will be broadcast by satellite TV to everyone. We thank God that He gave us this Bishop of Rome, a saintly Bishop, and we ask Him to help us: that he would help the Roman Church convert and move forward. I bless you with all my heart.

I greet the Italian-speaking faithful.  On the anniversary of the first apparition to the little visionaries of Fatima, I invite you to call upon the Virgin Mary, that she may strengthen our perseverance in seeking to love God and our neighbour.  I offer a special thought to all young people, to the elderly, to the sick and to newlyweds.  Constantly turn to Our Lady for help; in Her, we find a caring and tender mother, a safe haven in the midst of adversity.  I bless all of you!
at 17:05