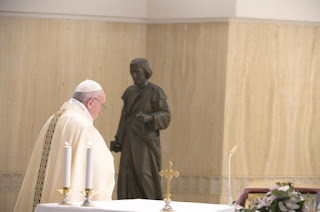 Let us pray today for families.  In this time of quarantine, family, closed in at home, seeking to do many new things, many creative things with their children, with everyone, in order to keep going.  And there is also another thing, that there is also domestic violence.  Let us pray for families, that they may continue in peace, with creativity and patience, during this quarantine. 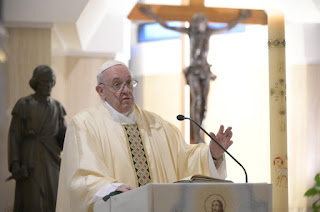 Homily of the Holy Father, Pope Francis
during the Mass celebrated on 4 May 2020

When Peter went up to Jerusalem, the faithful reprimanded him (cf Acts 11: 1-8). They reproached him for having entered the home of uncircumcised men and having eaten together with them, with pagans: this could not be done, it was a pity. The purity of the law did not allow this. But Peter did it because it was the Spirit that brought him there. There is always in the Church - and in the early Church especially, because things were not clear - this spirit of we are the righteous, and others are sinners. This we and the others, we and the others ... divisions: We have the right position before God, instead there are the others ... It is also said: They are the condemned, already. And this is a disease in the Church, a disease that arises from ideologies or religious parties ... To think that at the time of Jesus, at least there were four religious parties: the party of the Pharisees, the party of the Sadducees, the party of the zealots and the party of the Essenes, and each interpreted the law according to the idea he had about it. And this idea is school that is beyond the scope of the law, when it is a worldly way of thinking, of feeling ... that interprets the law. They also reproached Jesus for entering the house of the tax collectors - who were sinners, according to them - and for eating with them, with sinners, because the purity of the law did not allow it (cf Mt 9: 10-11); and the fact that he did not wash his hands before lunch (cf Mt 15: 2.20). Always that reproach causes division: this is the important thing, which I would like to emphasize.

There are ideas, positions that make division, to the point that the division of unity is more important. My idea of the Holy Spirit guiding us is more important. There is an emeritus cardinal who lives here in the Vatican, a good pastor, and he said to his faithful: The Church is like a river, you know? Some are more on this side, some on the other side, but the important thing is that everyone is in the river.  This is the unity of the Church. No one outside, all inside. Then, with the peculiarities: this does not divide, it is not ideology, it is lawful. But why does the Church have this river? It is because the Lord wants it so.

The Lord, in the Gospel, tells us: I have other sheep that do not come from this fence: even those I have to lead. They will listen to my voice and become one flock, one shepherd (Jn 10: 16). The Lord says:  I have sheep everywhere and I am a shepherd of all.  This all in Jesus is very important. We can think of the parable of the wedding banquet (cf Mt 22,1-10), when the guests did not want to go there: one because he had bought a field, one had gotten married ..., each gave his reason not to go. And the master got angry and said: "Go now to the crossroads of the streets and all those you find, call them to the wedding (Mt 22: 9). All of them. Big and small, rich and poor, good and bad. All of them. This all is somewhat the vision of the Lord who came for all and died for all. But did he also die for that wretch who made my life impossible? He died for him too. And for that brigand? ... He died for him. For everyone. And also for people who don't believe in Him or are from other religions. He died for everyone. This does not mean that proselytism must be done, no. But He died for everyone, justified everyone.

Here in Rome there was a lady, a good woman, a teacher, Professor Maria Grazia Mara, who when she was in difficulty regarding many things, and there were parties, said: But Christ died for everyone: go on!  That constructive ability. We have only one Redeemer, only one unity: Christ died for all.  On the other hand, there is a temptation ... Paul also suffered it: I am of Paul, I am of Apollo, I am of this, I am of the other ... (cf 1 Cor 3: 1-9). And we can think of us, fifty years ago, after the Council: the divisions that the Church suffered. I'm on this side, I think this, you that ... Yes, it is legitimate to think so, but in the unity of the Church, under the one Shepherd, Jesus.

Two things. The rebuke of the apostles to Peter because he had entered the house of the pagans. And Jesus who says: I am shepherd of all, I am shepherd of all, and who says: I have other sheep that do not come from this fence. I have to drive them too. They will listen to my voice and become one flock (cf Jn 10: 16). It is the prayer for the unity of all men, because all, men and women, we all have one Shepherd: Jesus.

May the Lord free us from the psychology of division, the desire to divide, and may the Lord help us to see this in Jesus, this great characteristic of Jesus: that in him we are all brothers and he is the shepherd of all. That word today: everyone, everyone, to accompany us throughout the day. 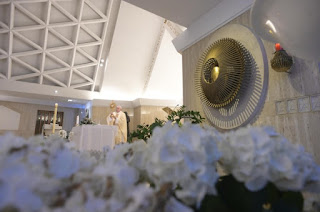