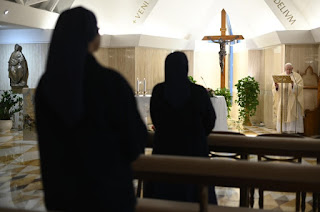 Yesterday, I received a letter from a group of artists: thanking us for the prayer we offered for them.  I want to ask the Lord to bless them because artists help us to understand what beauty is, and without beauty, the gospel could never be understood.  Let us pray again for artists. 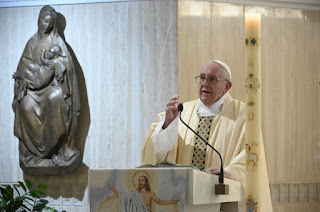 Homily of the Holy Father, Pope Francis
during the Mass celebrated on 7 May 2020

When Paul was invited to speak to the synagogue of Antioch (in Pisidia) to explain this new doctrine - which is to say - to explain Jesus, to proclaim Jesus, he began by talking about the history of salvation (cf Acts 13: 13-21). Paul got up and began: The God of this people of Israel chose our fathers and raised up the people during their exile in the land of Egypt (Acts 13: 17) ... and he (told) all the salvation, the history of their the salvation. Stephen did the same before his martyrdom (cf Acts 7: 1-54) and also Paul, at another time. The author of the Letter to the Hebrews does the same when he tells the story of Abraham and all our fathers (cf Heb 11: 1-39). We sang the same thing today, I will sing the love of the Lord forever, I will make your faithfulness known with my mouth (Ps 88: 2). We sang the story of David: I have found David, my servant (Ps 88: 21). Matthew (cf Mt 1: 1-14) and Luke (cf Lk 3: 23-38) do the same: when they start talking about Jesus, they begin with the genealogy of Jesus.

What is behind Jesus? There is a story. A story of grace, a story of election, a story of promise. The Lord chose Abraham and went with his people. At the beginning of the Mass, in the opening song, we sang: When you advanced, Lord, before your people and you opened the way and walked next to your people, close to your people. There is a story of God with his people. And for this reason, when Paul is asked to explain the reason for faith in Jesus Christ, he does not start with Jesus Christ: he begins in history. Christianity is a doctrine, yes, but not only that. It's not just the things that we believe in, it's a story that brings this doctrine which is God's promise, God's covenant, to be chosen by God.

Christianity is not just ethics. Yes, it is true, it has moral principles, but one is not a Christian only with a vision of ethics. There is more. Christianity is not an elite group of people chosen for the truth. This elitist sense that then goes on in the Church, doesn't it? For example, I am from that institution, I belong to this movement which is better than yours, I belong to this, to that other ... This is an elitist sense. No, Christianity is not this: Christianity is belonging to a people, to a people who have been chosen by God for freedom. If we do not have this awareness of belonging to a people, we will be ideological Christians, with a small doctrine of affirmation of the truth, with ethics, with a morality - he is well - or will we be an elite people? Do we feel part of a group chosen by God - Christians - and the others will go to hell or if they are saved it is by God's mercy, but they are the discarded ... And so on. If we do not have an awareness of belonging to a people, we are not true Christians.

This is why Paul explained Jesus from the beginning, as belonging to a people. And many times, many times, we fall into these partialities, be they dogmatic, moral or elitist, don't we? The sense of the elite is what hurts us so much and we lose that sense of belonging to the holy faithful people of God, which God has chosen in Abraham and promised, the great promise, Jesus, and he has helped us to go forward with hope and he has made a covenant with us. The people's conscience.

I am always struck by that passage from Deuteronomy, I think it is the 26th chapter, when it says: Once a year when you go to present your offerings to the Lord, the first fruits, and when your son asks you: 'But dad why do you do this?', you must not say to him: 'Because God commanded us', no ... say: 'We were a people, we were like this and the Lord freed us ...' (cf Dt 26: 1-11). Tell the story, as Paul did here. To pass on the history of our salvation. In the Book of Deuteronomy, the Lord advised: When you come to the land that you have not conquered, which I have conquered, you will eat the fruits that you have not planted and you will live in the houses that you have not built, at the moment of giving the offering (cf Dt 26: 1), the famous Deuteronomic creed says -: My father was a wandering Aramaean; he went down to Egypt (Dt 26: 5) ... He stayed there for 400 years, then the Lord freed him, and he carried on ... ". Sing the story, the memory of the people, of being a people.

And in this history of the people of God, up to and including Jesus Christ, there were saints, sinners and many ordinary people, good people, with virtues and sins, but all of them. The famous crowd that followed Jesus, who had the sense of belonging to a people. A self-styled Christian who does not have this flair is not a true Christian; he is a bit special and a little bit justified without the people. Belonging to a people, to remember the people of God. And this is taught by Paul, Stephen, another time by Paul, by the apostles ... And the advice of the author of the Letter to the Hebrews: Remember your ancestors (cf. Heb 11 , 2), that is, those who preceded us on this path of salvation.

If anyone were to ask me: What is the deviation of Christians for you today and always? What would be the most dangerous deviation for Christians for you?, I would say without doubting: the lack of a memory of belonging to a people. When this is lacking, dogmatisms, moralisms, ethics, elitist movements come into the picture. The people are missing. A sinful people, always, we all are, but who does not make mistakes in general, who has the sense of being an elected people, who walk behind a promise and who made a covenant that perhaps we did not understand, but we know.

Let us ask the Lord for this conscience of his people, which Our Lady beautifully sang in her Magnificat (cf Lk 1,46-56), that Zachariah sang so beautifully in his Benedictus (cf Lk 1,67-79); these are songs that we all pray throughout the day, in the morning and in the evening. A people's conscience: we are the holy faithful people of God who, as Vatican Council I, then II, says, in its totality has the flair for faith and is infallible in this way of believing. 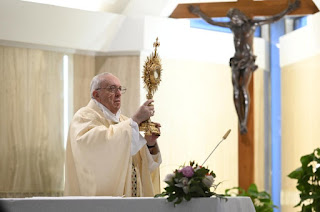