General Audience on the prayer of the just

This morning's General Audience began at 9:30am local time (3:30am EDT) inside the Library in the Vatican Apostolic Palace.

In his speech, the Pope continued the cycle of catechesis on prayer, adding his meditation on the theme: The prayer of the just (Ps 17: 1-3, 5).

After having summarized his catechesis in various languages, the Holy Father offered particular greetings to each group of the faithful. 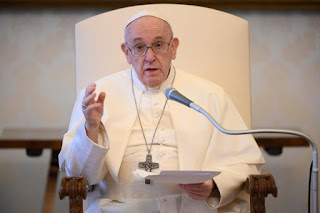 Let us dedicate today's catechesis to the prayer of the just.

God's plan for humanity is good, but in our daily life we experience the presence of evil: it is an everyday experience. The first chapters of the book of Genesis describe the progressive expansion of sin in human affairs. Adam and Eve (cf Gen 3: 3-7) doubt God's benevolent intentions, thinking that they are dealing with an envious divinity, which prevents their happiness. Hence the rebellion: they no longer believe in a generous Creator, who desires their happiness. Their hearts, yielding to the temptation of the evil one, are overtaken by delusions of omnipotence: If we eat the fruit of the tree, we will become like God (cf Gen 3: 5). And this is the temptation: this is the ambition that enters the heart. But the experience goes in the opposite direction: their eyes are opened and they discover that they are naked (Gen 3: 7), with nothing. Don't forget this: the tempter is a bad pay master, he pays badly.

Evil becomes even more disruptive with the second human generation, it is stronger: with the story of Cain and Abel (cf Gen 4: 1-16). Cain is envious of his brother: there is the worm of envy; although he is the firstborn, he sees Abel as a rival, one who undermines his primacy. Evil appears in his heart and Cain cannot master it. Evil begins to enter our hearts: our thoughts are always about looking at others in a bad light, with suspicions. And this also happens with our thoughts: "This is a bad guy, he'll hurt me." And this thought is entering the heart ... And so the story of the first fraternity ends with a murder. I am thinking today of human fraternity ... wars everywhere.

In the lineage of Cain, crafts and the arts develop, but violence also develops, expressed by the sinister song of Lamec, which sounds like a hymn of revenge: I killed a man for my nick and a boy for my bruise ... Seven times Cain will be avenged, but Lamec seventy-seven (Gen 4: 23-24). Revenge: You did it, you will pay for that. But the judge does not say this, I say it. And I judge the situation. And so evil spreads like wildfire, until it occupies the whole picture: The Lord saw that the wickedness of men was great on earth and that every intimate purpose of their hearts was nothing but evil, always (Gen 6: 5). The large frescoes of the flood (Gen 6-7) and the tower of Babel (Gen 11) reveal that there is a need for a new beginning, as for a new creation, which will have its fulfillment in Jesus Christ.

Yet, in these first pages of the Bible, another story is written, less conspicuous, much more humble and devoted, which represents the redemption of hope. Even if almost everyone behaves in a brutal way, making hatred and conquest the great engine of human affairs, there are also people capable of praying to God with sincerity, capable of writing man's destiny in a different way. Abel offers God a first-fruits sacrifice. After his death, Adam and Eve had a third son, Seth, from whom Enos (meaning mortal) was born, and it is said: At that time people began to invoke the name of the Lord (Gen 4: 26). Then Enoch appears, a person who walks with God and who is taken in rapture to heaven (cf Gen 5: 22, 24). And finally there is the story of Noah, a righteous man who walked with God (Gen 6: 9), before whom God holds back his purpose of erasing humanity (cf Gen 6: 7-8).

Reading these stories, one gets the impression that prayer is both the embankment and the refuge of man who is faced with the flood of evil that is growing in the world. Upon closer inspection, we also pray to be saved from ourselves. It is important to pray: Lord, please, save me from myself, from my ambitions, from my passions. The prayers of the first pages of the Bible are those of men who work for peace: in fact, prayer, when it is authentic, free from instincts of violence, is a gaze turned to God so that he may return to take care of man's heart. The Catechism reads: This quality of prayer is lived by a multitude of righteous in all religions (CCC, 2569). Prayer cultivates flowerbeds of rebirth in places where man's hatred has only been able to enlarge the desert. And prayer is powerful, because it attracts the power of God and the power of God always gives life: always. He is the God of life, and he is reborn.

This is why the lordship of God passes through the chain of these men and women who are often misunderstood or marginalized in the world. But the world lives and grows thanks to the strength of God that these servants of his attract with their prayer. They are a chain that is not at all rowdy, which rarely leaps to the headlines, yet it is so important to restore confidence in the world! I remember the story of a man: a government leader, an important man, not of this time, of times gone by. An atheist who had no religious sense in his heart, but as a child he had witnessed his grandmother praying, and this remained in his heart. And at a difficult moment of his life, that memory returned to his heart and he said: "But my grandmother used to pray ...". Thus he began to pray using the prayers his grandmother used to use and there he found Jesus. Prayer is a chain of life, always: many men and women who pray, sow life. Prayer sows life, small prayers: this is why it is so important to teach children to pray. It pains me when I find children who cannot make the sign of the cross. We must teach them to make the sign of the cross well, because that is the first prayer. It is important that children learn to pray. Then, perhaps, they will be able to forget, take another path; the first prayers learned as a child remain in the heart, because they are a seed of life, the seed of dialogue with God.

The path of God in the history of God passed through them: it passed through a rest of humanity that did not conform to the law of the fittest, but asked God to perform his miracles, and above all to transform our hearts of stone into hearts of flesh (cf Ez 36,26). And this helps our prayer: because prayer opens the door to God, transforming our hearts, which many times are made of stone into human hearts. And it takes a lot of humanity, and with humanity we can pray well.
Testo originale nella lingua italiana

The Holy Father's catechesis was then summarized in various languages and His Holiness offered greetings to each group of the faithful who were following along via various media.  To French-speaking viewers, he said:

I cordially greet the French-speaking faithful.  In a few days, we will celebrate the Feast of Pentecost.  Let us pray to the Holy Spirit, that he may make us people of peace and of fraternity, and give everyone confidence and hope.  May God bless you!

I greet the English-speaking faithful joining us through the media. As we prepare to celebrate the Solemnity of Pentecost, I invoke upon you and your families an abundance of the gifts of the Holy Spirit. May God bless you!

I extend a warm greeting to all German believers. Let us follow the example of the Blessed Virgin Mary: with her constant prayer, together with the apostles, she implored the Holy Spirit for the Church, who renewed people in the love of Christ. May the spirit of love fill our hearts so that they are constantly focused on the Lord in prayer.

I cordially greet the Spanish-speaking faithful who are following this catechesis through the media. I encourage you to read the first pages of the book of Genesis to rediscover the power of the friends of God prayer, and to do the same. Let us invoke his Name with confidence and raise our joint prayer so that the Lord may heal this world of all its ailments, and help us experience the joy of salvation.

I greet all Portuguese-speaking listeners, reminding you that prayer opens the doors of our lives to God. And God teaches us to go outside of ourselves to meet others who are being tested, giving them consolation, hope and support. I cordially bless you in the name of the Lord.

I salute all Arabic speaking believers who are following this audience via social media. Prayer does not change God, it changes us, and makes us more submissive to His holy will. Prayer leads us to enter slowly into the divine light that cleanses our hearts from all darkness. May God bless you and keep you safe from all evil!

I cordially greet Poles who are joining us through the mass media. As we pray the novena in preparation for the Solemnity of Pentecost, let us ask the Divine Comforter to be present in us, that through His gifts, he would help us grow in the Christian faith. In this difficult time the world is going through, let us pray with the words of Saint John Paul II in Warsaw: Let Your Spirit descend and renew the face of the earth! This land! (June 2, 1979). I bless you with all my heart.

I greet the Italian-speaking faithful.  The day after tomorrow, we will celebrate the liturgical Memorial of Pope Saint Paul VI.  May the example of this Bishop of Rome, who has reached the heights of holiness, encourage each one of us to generously embrace the values of the gospel.

I turn my thoughts to the elderly, the young, the sick and to newlyweds.  In a spirit of preparation for the Solemnity of Pentecost, which is very close, I exhort you to always be docile to the actions of the Holy Spirit, so that your lives may always be warmed and enlightened by the love which the Spirit of God pours into your hearts.  I bless all of you!
at 15:43