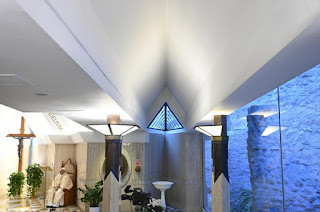 Three weeks after the Lord's Resurrection, today, the Church celebrates Good Shepherd Sunday on this fourth Sunday of Easter: Jesus, the Good Shepherd.  This makes me think of all the pastors throughout the world who are giving their lives for the faithful, even in the midst of this pandemic, many of them, more than 100 of them here in Italy have died.  And I am also thinking about the other who are caring for people: the doctors.  There is talk about doctors, about all the good that they are doing, but we must realize that, only here in Italy, 154 doctors have died, while on the job.  May the example of these shepherd priests and shepherd doctors help us to care for the holy and faithful people of God. 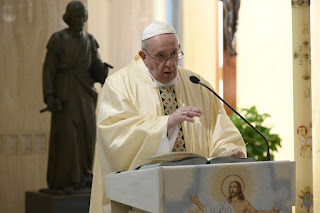 Homily of the Holy Father, Pope Francis
during the Mass celebrated on 3 May 2020

The first Letter of the apostle Peter, which we have heard, is a step toward serenity (cf 1 Pet 2: 20-25).  It speaks of Jesus.  It says: He carried our sins in his body on the wood of the cross, so that, no longer living for sin, we would live for justice; by his wounds we have been healed.  You were wandering like sheep, but now you have been brought back to the shepherd, the guardian of your souls (1 Pet 2: 24-25).

Jesus is the shepherd - as Peter sees it - who comes to save, to save the wandering sheep; that was us.  And in Psalm 22, which we read after this first reading, we repeated the phrase: The Lord is my shepherd; there is nothing I shall want (Ps 22: 1).  The Lord's presence as a shepherd, as the shepherd of the flock.  And Jesus, in chapter 10 of the gospel of John, which we have also read, presents himself as the shepherd.  Indeed, not only as the shepherd but the gate by which we enter the flock (cf Jn 10: 8).  All those who have come and who have not entered by that gate were thieves and brigands or they wanted to take advantage of the flock: all those fake pastors.  And in the history of the Church there have been many who have exploited the flock.  They are not interested in the good of the flock, but only to make a career or politics or money.  But the flock knows them, they have always known and they have gone in search of God and his ways.

But when there is a good shepherd who helps the sheep to go forward, all of the flock goes forward.  The good shepherd listens to the flock, guides the flock, cares for the flock.  And the flock knows how to distinguish between the shepherds, they are never wrong: the flock trusts the good Shepherd, trusts Jesus.  Only the shepherd who resembles Jesus can gain the trust of the flock, because He is the gate.  Jesus' style should always be the style of a shepherd, there is no other way.  But even Jesus, the good Shepherd, as Peter says in the first reading: suffered for you, leaving you an example, so that you would follow in his footsteps: he did not commit any sin and no deception was found in his mouth: insulted, he did not respond with insults; mistreated, he did not seek revenge (1 Pet 2: 21-23).  He was meek.  Meekness is one of the signs of a good shepherd.  The good shepherd is meek.  A shepherd who is not meek is not a good shepherd.  He has something to hide, because meekness shows itself as it is, without seeking to defend itself.  Indeed, the shepherd is tender, he has the tenderness of closeness, he knows the sheep one by one, by name, and he takes care of each one as if it were the only sheep, to the point that when he gets home at the end of a day of work, when he is tired, if he realizes that he is missing one of the sheep, he goes out to work again in order to search for the lost sheep, and when he finds that sheep, he carries that one, carries it on his shoulders (cf Lk 15: 4-5).  This is the good shepherd, this is Jesus, this is the one who is accompanying us on the journey of life.  And this idea of the shepherd, this idea of the flock and of the sheep, is an Easter idea.  During the first week of Easter, the Church sings a beautiful hymn for those who have been newly baptized: These are the new lambs, the hymn that we heard at the beginning of this Mass.  It is an idea of community, of tenderness, of goodness, of meekness.  This is the Church that Jesus wants, and he is caring for this Church.

This Sunday is a beautiful Sunday, it is a Sunday of peace, a Sunday of tenderness, of meekness, because our Shepherd is taking care of us.  The Lord is my shepherd; there is nothing I shall want (Ps 22: 1). 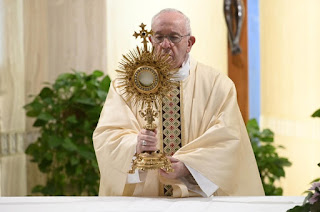 
Greetings at the conclusion of the Mass