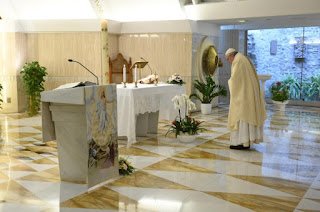 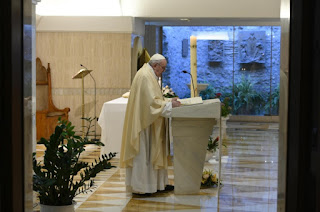 Homily of the Holy Father, Pope Francis
during the Mass celebrated on 15 May 2020

In the Book of the Acts of the Apostles we see that in the Church, at the beginning, there were times of peace; this is said many times: the Church grew, in peace, and the Spirit of the Lord spread (cf Acts 9: 31); times of peace. There were also times of persecution, starting with the persecution of Stephen (cf chapters 6-7), then Paul - a persecutor - converted, then he was also persecuted ... Times of peace, times of persecutions, and there were also times of disturbance. And this is the topic of today's first reading: a time of disturbance (cf Acts 15: 22-31). We knew that some of us - the apostles write to the Christians who came from paganism - we knew that some of us, to whom we had not given any assignment, came to upset you - to upset you - with speeches that shocked your hearts (Acts 15: 24).

What had happened? These Christians who came from the pagans had believed in Jesus Christ and received baptism, and they were happy: they had received the Holy Spirit. From paganism to Christianity, without any intermediate stage. Instead, these who call themselves the Judaizers argued that this could not be done. If one was a pagan, first he had to become a Jew, a good Jew, and then to become a Christian, to be in the line of the election of the people of God. And these Christians did not understand this: "But how is this possible? Are we are second-class Christians? Can't we go from paganism directly to Christianity? Isn't it true that the resurrection of Christ dissolved the ancient law and brought it to an even greater fullness?  They were troubled and there were many discussions between them. And those who wanted this were people who with pastoral arguments, theological arguments, even some morals, argued that no, we should take the step like this! And they questioned the freedom of the Holy Spirit, also the gratuitousness of Christ's resurrection and grace. They were methodical. And also rigid.

Of these, of their teachers, of the doctors of the Law, Jesus had said: Woe to you who travel the sky and the sea to make a convert and when you have found one you do the job worse than before. You make him a son of Gehenna.  More or less this is what Jesus says in the 23rd chapter of Matthew (cf Mt 23: 15). These people, who were ideological, rather than dogmatic, ideological, had reduced the Law, the dogma to an ideology: this must be done, and this, and this ... A religion of prescriptions, and with this they took away the freedom of the Spirit. And the people who followed them were rigid people, people who did not feel comfortable, did not know the joy of the Gospel. The perfection of the way to follow Jesus was rigidity: This must be done, this, this, this ... These people, these doctors manipulated the consciences of the faithful and either made them rigid or they went away.

For this reason, I repeat to myself many times and I say that rigidity is not of the good Spirit, because it questions the gratuitousness of redemption, the gratuitousness of Christ's resurrection. And this is an old thing: throughout the history of the Church, this was repeated. Think of the Pelagians, these ... these rigid people; they were famous. And even in our times we have seen some apostolic organizations that seemed really well organized, that worked well ..., but they were all rigid, all equal to each other, and then we learned about the corruption that was inside, even in the founders.

The road ahead (the way by which we must proceed) is beautiful: the apostles gathered in this council and at the end, they wrote a letter that said: It seemed good, in fact, to the Holy Spirit and to us, not to impose another obligation on you ... (Acts 15: 28), and they listed these moral, common sense obligations: not to confuse Christianity with paganism, with refraining from the flesh offered to idols, etc. And in the end, these troubled Christians gathered in the assembly received the letter and, when they read it, they rejoiced at the encouragement it instilled (Acts 15: 31). From disturbance to joy. The spirit of rigidity always brings upset: But did I do this well? Did I not do it well?  Scruples. The spirit of evangelical freedom leads us to joy, because this is exactly what Jesus did with his resurrection: he brought joy! The relationship with God, the relationship with Jesus is not a relationship, of doing things: I do this and you give me this. Such a relationship, I say - forgive me Lord - would be a commercial, no! It is free, just as Jesus' relationship with the disciples was free. You are my friends (Jn 15: 14). I do not call you servants, I call you friends (cf Jn 15: 15). You did not choose me, but I chose you (Jn 15: 16). This is gratuity. 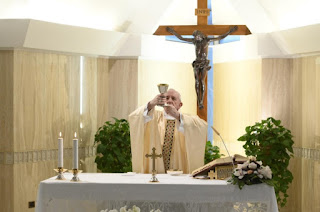