General Audience: a new cycle of teachings on prayer

After summarizing his catechesis in various languages, the Holy Father offered particular greetings to the faithful.  Then, he offered an appeal for workers, especially those who are exploited.

The General Audience concluded with the recitation of the Our Father and the Apostolic blessing. 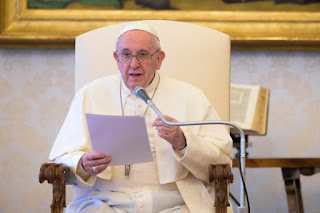 Today, we begin a new cycle of catechesis on the theme of prayer.  Prayer is the breath of faith, its most proper expression.  Like a cry that comes from the heart of those who believe and entrust themselves to God.

Let's think of the story of Bartimaeus, a character in the gospel (cf Mk 10: 46-52 ff) And, I confess, for me, he was the cutest of all. He was blind.  He sat begging on the side of the road on the outskirts of his city, Jericho. He was not an anonymous character, he had a face, a name: Bartimaeus, that is son of Timaeus. One day he heard that Jesus was going to pass by. In fact, Jericho was a crossroads of people, continually crossed by pilgrims and merchants. Then Bartimaeus lurked: he would have done everything possible to meet Jesus. Many people did the same thing: remember Zacchaeus, who climbed the tree. Many other people wanted to see Jesus, too.

So this man entered the gospels like a voice crying out loudly. He could not see him; he could not know if Jesus is near or far, but he could hear him, he could understand him from the size of the crowd, which at a certain point increased and approached ... But he was completely alone, and nobody cared. And what did Bartimaeus do? He shouted. And screamed, and he continued screaming. He used the only weapon in his possession: his voice. He started shouting: Son of David, Jesus, have mercy on me! (Mk 10: 47). And he continued, shouting.

His repeated screams would have been annoying, he would not have seemed polite, and many probably scolded him, told him to keep quiet: Be polite, do not do this! But Bartimaeus was not silent, on the contrary, he shouted even louder: Son of David, Jesus, have mercy on me! (Mk 10: 47). That stubbornness - which is so beautiful - of those who seek a grace and knock, knock on the door of the heart of God. He shouts, knocks. That expression: Son of David is very important; it means Messiah - this man was confessing the Messiah - this is a profession of faith that comes from the mouth of that man who was despised by everyone.

And Jesus listened to his cry. Bartimaeus' prayer touched his heart, the heart of God, and the doors of salvation were opened for him. Jesus called him. He lept to his feet and those who had previously told him to keep quiet now led him to the Master. Jesus spoke to him, asked him to express his desire - this is important - and then the cry became a question: May I see again, Lord! (cf Mk 10: 51).

Jesus said to him: Go, your faith has saved you (Mk 10: 52). He recognized that poor, helpless, despised man, and he recognized all the power of his faith, which attracts the mercy and power of God. Faith is what it takes to have two hands raised, and a voice that cries out to implore the gift of salvation. The Catechism states that humility is the foundation of prayer (Catechism of the Catholic Church, 2559). Prayer comes from the earth, from humus - from which humble and humility derive -; humility comes from our precarious state, from our continuous thirst for God (cf Catechism, 2560-2561).

Faith, as we have seen in Bartimaeus, is a cry; non-faith is the act of stifling that cry. That attitude that people had, in silencing him: they were not people of faith, but he was. Suffocating that cry is a kind of silencing. Faith is a protest against a painful condition for which we do not understand the reason why; non-faith is limited to suffering as a result of a situation to which we have adapted. Faith is hope of being saved; non-faith is getting used to the evil that oppresses us and continuing like that.

Dear brothers and sisters, let's begin this series of catecheses with Bartimaeus' cry, because perhaps in a figure like him everything has already been written. Bartimaeus is a persevering man. Around him there were people who explained that begging was useless, that it was an unanswered shouting, that it was disturbing and that was enough - please stop shouting - but he did not remain silent. And in the end he got what he wanted.

But perhaps these words are not carved in the whole of creation. Everything invokes and pleads for the mystery of mercy to find its definitive fulfillment. Not only do Christians pray: they share the cry of prayer with all men and women. But the horizon can still be widened: Paul says that the whole creation is groaning and suffering the pains of childbirth (Rom 8: 22). Artists often make themselves interpreters of this silent cry of creation, which presses in every creature and emerges above all in the heart of man, because man is a beggar for God (cf CCC, 2559). This is a beautiful definition of man: a beggar for God. Thank you.
Testo originale nella lingua italiana 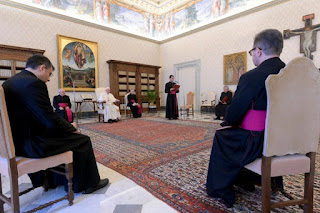 The Holy Father's catechesis was then summarized in various languages and His Holiness offered particular greetings to each group of the faithful.  To French-speaking viewers, he said:

I cordially greet the French-speaking faithful.  Dear brothers and sisters, the difficult times that we are currently experiencing are a favourable time for us to rediscover the necessity of prayer in our lives!  Let us open wide the doors of our hearts to the love of God our Father, who knows how to listen to us!  May God bless you!

I greet the English-speaking faithful joining us through the media. In this Easter season, I invoke upon you and your families the joy and strength that come from the Risen Christ. May God bless you!

I warmly greet our German-speaking brothers and sisters. Prayer is the most beautiful expression of faith in God and trust in his merciful love. Let us ask God to give us a humble heart so that we may realize everything he hopes for and always feel a thirst for him. May the risen Lord fill our hearts with his peace and joy in this Easter time.

I cordially greet the Spanish-speaking faithful who are following this catechesis through the media. Let us ask Jesus, the Good Shepherd, to grant us the ability to be men and women of prayer, that with trust and perseverance we may present our needs and those of all our brothers and sisters to our compassionate Father. The day after tomorrow, May 8, the feast of Our Lady of Luján will celebrated in Argentina. May she, Mother of God and our Mother, intercede for us and obtain for us from her Son the graces we need in this difficult time the world is going through. May God bless you.

I cordially greet the Portuguese-speaking faithful. Dear friends, prayer opens the door of our lives to God and helps us to go out of ourselves in order to be in solidarity with others who are living through trials. Thus, especially in this pandemic moment, we can bring them consolation, light and hope. May the blessing of the Lord come upon you and your families.

I greet all Arabic speaking believers who are following this catechesis via social media. Let us learn from the prayer of Blind Bartimaeus that first, we must request God's mercy with urgency and faith. And let the Lord show His mercy to us in the way he sees to be appropriate for our salvation. May God bless you and keep you safe from all evil!

I greet all Polish people. Dear brothers and sisters, the day after tomorrow you will celebrate the Feast of Saint Stanisław, bishop and martyr, patron of Poland. For centuries, this great Saint has remained in the memory and spirituality of Poles as a relentless defender of faith, moral and social order, guardian of the weak and defenseless, a shepherd who was always ready to give his life for Christ and for his sheep. Through his intercession, let us pray for the Church in Poland and for the Polish nation so that - in today's difficult world situation caused by a pandemic, and at all times - you may enjoy God's blessing, peace and prosperity. I bless you with all my heart!

The day after tomorrow, Friday, 8 May, fervent prayers for the Supplication to Our Lady of the Rosary will rise at the Shrine of Pompeii. I urge everyone to join spiritually in this popular act of faith and devotion, so that through the intercession of the Holy Virgin, the Lord may grant mercy and peace to the Church and to the whole world.

I greet the Italian-speaking faithful. We have just started the month of May, which Christian popular devotion consecrates to the Mother of the Lord. I urge you to entrust yourself to her, who was given to us as our Mother under the Cross.

I address a special thought to young people, the elderly, the sick and to newlyweds. Place yourselves confidently under the maternal protection of Mary and be sure that she will help you to be aware of her comfort in the hour of trial. May the Lord bless you and may Our Lady protect you. 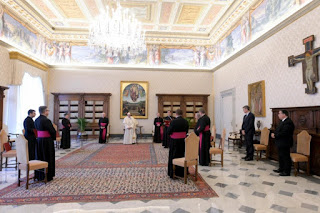 At the conclusion of the General Audience, the Holy Father said:

On 1st May, I received several messages about the world of work and its problems. I was particularly struck by that of the farm workers, among them many migrants, who work in the Italian countryside. Unfortunately, many are very harshly exploited. It is true that the current crisis affects everyone, but people’s dignity must always be respected. That is why I add my voice to the appeal of these workers and of all exploited workers. May the crisis give us the opportunity to make the dignity of the person and the dignity of work the centre of our concern.
at 10:15