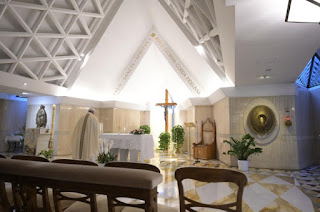 Today, World Red Cross and World Red Crescent Day is being celebrated.  Let us pray for the people who are working in these worthy institutions: may the Lord bless their work that is doing so much good. 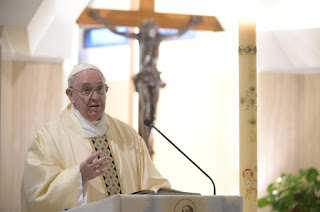 Homily of the Holy Father, Pope Francis
during the Mass celebrated on 8 May 2020

This conversation that Jesus had with the disciples was at the table, again, at the Last Supper (cf Jn 14: 1-6). Jesus was sad and everyone was sad: Jesus had said that he would be betrayed by one of them (cf Jn 13: 21) and everyone perceived that something bad would have happened. Jesus began to console his own, because one of the tasks, of the works of the Lord is to console. The Lord consoles his disciples and here we see what Jesus' way of consoling is. We have many ways of consoling, from the most authentic, from the closest to the most formal, like those telegrams of condolence: Deeply grieved for ... It does not console anyone, it is a fake, it is the consolation of formalities. But how does the Lord console? This is important to know, because we too, when in our life we must experience moments of sadness, we learn to perceive what the true consolation of the Lord is.

And in this passage of the Gospel we see that the Lord always consoles in closeness, with truth and hope. These are the three characteristics of the Lord's consolation.

In closeness, never distant: we are. That beautiful word: we are. We are here with you. And many times, these words are spoken in silence. But we know that the Lord is there. He is always there. That closeness which is the style of God, even in the Incarnation, his way of drawing near to us. The Lord consoles us in closeness. And he doesn't use empty words, on the contrary, he prefers silence. The strength of closeness, of presence. He speaks little, but he is close.

A second sign of Jesus' closeness, of Jesus' way of consoling, is truth: Jesus is truthful. He doesn't say formal things that are lies: No, don't worry, everything will pass, nothing will happen, it will pass, things will pass ... No. He speaks the truth. He does not hide the truth. Because in this passage he himself says: I am the truth (cf Jn 14: 6). And the truth is: I am leaving, that is: I will die (cf Jn 14: 2-3). We are facing death. It is the truth. And he says it simply and mildly, without hurting. But we are facing death. He does not hide the truth.

And this is the third sign: Jesus consoles in hope. Yes, it's a bad time, but do not let your heart be troubled ... Have faith in me too (Jn 14: 1). I tell you one thing - says Jesus - in my Father's house there are many dwellings … I am going to prepare a place for you (Jn 14: 2). First, he opens the doors, the doors of that place, through which we will all pass, I hope. I will come again and take you with me, so that where I am you may also be (Jn 14: 3). The Lord comes back every time someone of us is on the way to leaving this world. I will come and take you: hope. He will come and take us by the hand and bring us. He does not say: No, you will not suffer, it is nothing ... No. He speaks the truth: I am close to you. This is the truth: this is an ugly moment, of danger, of death. But do not let your heart be troubled, remain in that peace, that peace that is the basis of every consolation, because I will come and I will take you by the hand ... to the place where I will be.

It is not easy to allow ourselves to be consoled by the Lord.  Many times, in terrible moments, we are angry with the Lord and we do not allow the Lord to come and to speak in this way, with such sweetness, with such closeness, with such meekness, with this truth and with this hope.

Let us ask for the grace to learn how to allow ourselves to be consoled by the Lord.  The Lord's consolation is truth; he does not deceive.  This is not anesthesia, no.  But closeness, truth and he opens the doors to hope. 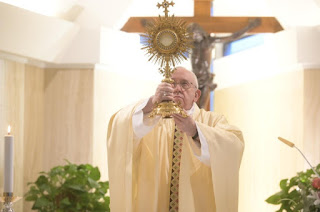