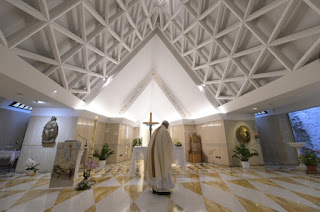 In the past two days, there have been two commemorations: the 70th anniversary of the Declaration by Robert Schuman which inaugurated the European Union, and also the commemoration of the end of the war.  Let us pray to the Lord for Europe, today, that unity might increase, in the unity of fraternity that makes it possible for all people to grow in unity and in diversity. 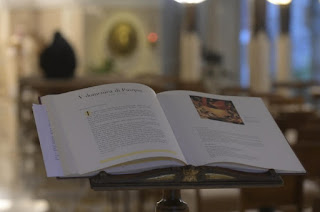 Homily of the Holy Father, Pope Francis
during the Mass celebrated on 10 May 2020

In this passage of the Gospel (cf Jn 14: 1-14), Jesus' farewell speech, Jesus says that he is going to the Father. And he says that he will be with the Father and that even those who believe in him «will do the works that I do and will do greater works than these, because I am going to the Father. And whatever you ask in my name, I will do it, for the Father to be glorified in the Son. If you ask me anything in my name, I will do it (Jn 14: 12-14). We can say that this passage from the Gospel of John is the declaration of his ascent to the Father.

The Father has always been present in the life of Jesus, and Jesus spoke about it. Jesus prayed to the Father. And many times, he spoke of the Father who cares for us, like he cares for birds, lilies of the field ... The Father. And when the disciples asked him to teach them how to pray, Jesus taught them to pray to the Father: our Father (Mt 6: 9). Jesus always goes/turns to the Father. But in this step he is very strong; and it is also as if he opens the doors of the omnipotence of prayer. “Because I am with the Father: you can ask and I will do everything ... because the Father will do it with me (cf Jn 14: 11). This trust in the Father, trust in the Father who is capable of doing everything. This courage to pray, because it takes courage to pray! It takes the same courage, the same frankness as it does to preach: the same. We think of our father Abraham, when he - I believe it is said - haggled with God to save Sodom (cf Gen 18: 20-33): What if they were less? And less? And less? ...  Really, he knew how to negotiate. But always with this courage: Excuse me, Lord, but give me a discount: a little less, a little less ... Always the courage of the struggle in prayer, because to pray is to struggle: to struggle with God. And then, Moses: the two times that the Lord would have wanted to destroy the people (cf Ex 32: 1-35 and cf Nm 11: 1-3) and to make him head of another people, Moses said No! And he said no to the Father! With courage! But if you go to prayer like this - a timid prayer that is offered in whispers - this is a lack of respect! To pray is to go with Jesus to the Father who will give you everything. Courage in prayer, frankness in prayer. The same courage and frankness that it takes for preaching.

And we heard in the first Reading about that conflict in the early days of the Church (cf Acts 6: 1-7), because the Christians of Greek origin were murmuring - they were murmuring, already at that time they did this: it is seen that it is a habit in the Church ... - they murmured because their widows, their orphans were not well cared for; the apostles did not have time to do many things. And Peter - with the apostles -, enlightened by the Holy Spirit, invented, let's say, deacons. Let's do one thing: we ned to look for seven people who are good and these men can take care of serving those in need (cf Acts 6: 2-4). The deacon is the custodian of service in the Church. And so these people, who have reason to complain, are well cared for in their needs and we - says Peter: we have heard it - and we will dedicate ourselves to prayer and the proclamation of the Word (cf Acts 6: 5). This is the bishop's task: to pray and preach, with this strength that we felt in the Gospel. The bishop is the first to go to the Father, with the trust that Jesus gave, with courage, with parrhesia, to fight for his people. The first task of a bishop is to pray. Peter said it: And to us, prayer and the proclamation of the Word.

I once knew a priest, a holy pastor, a good man who, when he found a bishop would greet him well.  He was very loveable, and he would always ask: Your Excellency, how many hours a day do you pray?, and he would continue: Because the first task is always to pray.  Because this is the prayer of the leader of the community for the community, the intercession to the Father, asking him to take care of his people.

The bishop's prayer, the first and most important task: to pray. And people learn by seeing the bishop in prayer: they in turn learn to pray. Because the Holy Spirit teaches us that it is God who does things. We do a little bit, but it is he who does things in the Church, and prayer is the one thing that carries the Church forward. And in order for this to happen, in order for the Church leaders to say so, the bishops, we must begin with prayer.

Peter's words are prophetic: Let the deacons do these things so that the people will be well cared for and solved their problems and even cared for their needs.  But we, bishops, must pray and proclaim the Word.

It is sad to see good bishops, good, good people, but they are busy with many things, the economy, and this and that ... and that other thing ... Prayer must have the first place. Then, the other things. But when other things take away space for prayer, something is wrong. And the prayer is strengthened by what we have heard in the Gospel of Jesus: I am going to the Father. And whatever you ask the Father in my name, I will do, so that the Father may be glorified (Jn 14: 12-13).  In this way, the Church goes on, with prayer, the courage of prayer, because the Church knows that without this ascent the Father cannot survive. 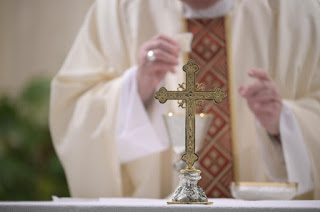