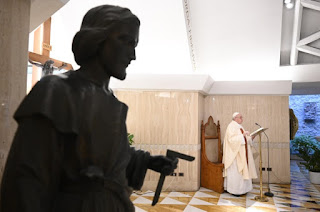 Let us pray today for governments who have the responsibility to care for their people in these moments of crisis: Heads of State, Presidents of governments, legislators, mayors, regional Presidents ... May the Lord help them and give them strength, because their work is not easy.  And when there are differences between them, may they always understand that, in moments of crisis, they need to be very united for the good of their people, because unity is superior to conflict.

Today, Saturday 2 May, there are 300 prayer groups who are joining us in prayer.  They are known as madrugadores in Spanish: early risers.  They get up early in the morning to pray, they get up on their own, to pray.  They are all united with us today, at this moment. 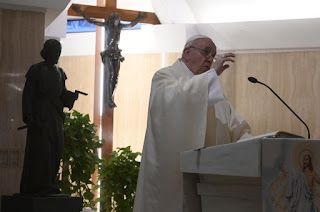 Homily of the Holy Father, Pope Francis
during the Mass celebrated on 2 May 2020

The first reading begins: The Church throughout all Judea, Galilee, and Samaria was at peace. She was being built up and walked in the fear of the Lord, and with the consolation of the Holy Spirit she grew in numbers (Acts 9: 31).  It was a time of peace.  And the Church was growing.  The Church was tranquil, she was enjoying the comfort of the Holy Spirit, a consolation.  These were good times ... Then, there was the healing of Aeneas, and Peter raised Tabatha ... these were things that were done in peace.

But there were also times that were not so peaceful, in the early Church: times of persecution, difficult times, times that put believers into crisis. Times of crisis. And a time of crisis is what the Gospel of John tells us about today (cf Jn 6: 60-69). This passage of the Gospel is the end of a whole sequence that began with the multiplication of the loaves, when they wanted to make Jesus king, Jesus went off to pray, they could not find him the next day, they went looking for him, and Jesus reproached them that they were seeking him because they were hoping to be fed with more food and not so that they could receive the words of eternal life ... And that story ends here. They say: Give us this bread, and Jesus explains that the bread he will give is his own body and blood.

At that time, many of Jesus' disciples, after listening to him, said: 'This word is hard! Who can bear it? (Jn 6: 60). Jesus said that whoever did not eat his body and drink his blood would not have eternal life. Jesus also said: If you eat my body and drink my blood, you will rise again on the last day (cf Jn 6: 54). These are the things that Jesus said.  Meanwhile, the disciples were thinking: This word is hard! (Jn 6: 60)  It is too tough. Something is not working here. This man has gone beyond the limits. And this was a moment of crisis. There were moments of peace and moments of crisis. Jesus knew that the disciples were murmuring. Here there is a distinction between the disciples and the apostles: the disciples were those 72 or more, the apostles were the Twelve. In fact, Jesus knew from the beginning who were those who did not believe and who was the one who would betray him (Jn 6: 64). And faced with this crisis, he reminded them: This is why I told you that no one can come to me unless it is granted to him by the Father (Jn 6: 65). He started talking again about being drawn to the Father: the Father draws us to Jesus. And this is how the crisis was resolved.

And from that moment, many of his disciples turned back and no longer walked with him (Jn 6: 66). They distanced themselves. This man is a little dangerous, a little ... but these doctrines ... Yes, he is a good man, he preaches and heals, but when he gets to these strange things ... Please, let's go (cf Jn 6: 66). This was the same reaction that the disciples of Emmaus had on the morning of the resurrection: "Well, yes, a strange thing: the women who say that the tomb is empty ... but this stinks - they said - let's get out of town early because the soldiers will come and crucify us (cf Lk 24: 22-24). The soldiers who guarded the tomb did the same thing: they had seen the truth, but then they preferred to sell their secret: We are sure: we do not want to put ourselves in these stories, which are dangerous (cf Mt 28: 11-15).

A moment of crisis is a moment of choice, it is a moment that places us face to face with the decisions we have to make. In life, we have all had such moments, and we will have other moments of crisis: family crises, marriage crises, social crises, work crises, many crises ... This pandemic is also a moment of social crisis.

How should we react in times of crisis? At that moment, many of his disciples went back and never went with him (Jn 6: 66). Jesus makes the decision to question the apostles: Then Jesus said to the Twelve: 'Do you also want to go away?' (Jn 6: 67). Make a decision. And Peter makes the second confession: Simon Peter answered him: 'Lord, to whom shall we go? You have words of eternal life and we believe and know that you are the Holy One of God' (Jn 6: 68-69). Peter confesses, on behalf of the Twelve, that Jesus is the Holy One of God, the Son of God. The first confession - You are the Christ, the Son of the living God - and immediately afterwards, when Jesus began to explain the passion that was to come, he tried to stop him: No, no, Lord, not this!, and Jesus rebuked him (cf Mt 16: 16-23). But Peter has matured a bit and here, Jesus doesn't scold him. He does not understand what Jesus says, this eating the flesh, drinking the blood (cf Jn 6: 54-56), Peter does not understand, but he trusts the Master. He trusts. And he makes this second confession: But to whom shall we go? Please, you have words of eternal life (cf Jn 6: 68).

This example helps all of us to live moments of crisis. In my land there is a saying that says: When you go horseback riding and you have to cross a river, please don't change horses in the middle of the river. In times of crisis, be very firm in your conviction of faith. Those who left, changed horses, they wanted another teacher who was not as hard, as they said about him. In times of crisis there is perseverance, silence; stay where we are, stop. This is not the time to make changes. It is the moment for faithfulness, faithfulness to God, faithfulness to decisions that we have made before. It is also the moment of conversion, because yes, this fidelity will inspire some changes for the good, not to get away from the good.

Moments of peace and moments of crisis. We Christians must learn to manage both. Both. Some spiritual father says that the moment of crisis is like going through the fire to become strong. May the Lord send us the Holy Spirit to guide us and help us know how to resist temptations in times of crisis, to know how to be faithful to the first words, with the hope of living after moments of peace have passed. Let us think about our crises: family crises, neighbourhood crises, work crises, social crises ... throughout the world, within our country ... There are so many crises, so many crises.

May the Lord give us the strength - in moments of crisis - to not abandon our faith. 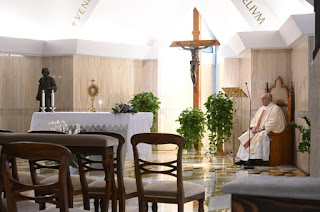