Today is the commemoration of Saint Luisa di Marillac (the liturgical memorial is normally celebrated on 15 March but, since that date fell in the time of Lent, it was transferred to today).  Let us pray for the Vincentian Sisters who have been operating this clinic, this hospital for almost 100 years (he was speaking of the Santa Marta paediatric dispensary located inside the Vatican which is operated by the Sisters of the Congregation of the Daughters of Charity) and who are working here, at Santa Marta, in this hospital.  May the Lord bless the Sisters. 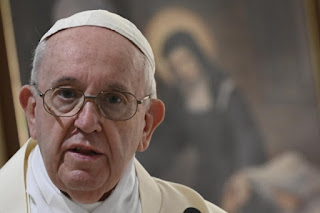 Homily of the Holy Father, Pope Francis
for the General Audience

In the Psalm this morning, we recited: Sing to the Lord a new song, for he has done marvellous deeds.  His right hand and his holy arm have brought him victory.  The Lord has made his salvation known, in the eyes of those to whom he has revealed his justice (Ps 97: 1-2).  This is true.  The Lord has done marvellous things.  But how much effort he has put forward!  How hard it has been for Christian communities to carry on the Lord's marvels!

In the passage from the Acts of the Apostles (cf Acts 13: 44-52) we heard joy: the whole city of Antioch gathered to listen to the Word of the the Lord, for Paul, the apostle, was preaching with strength, and the Spirit was helping him.  But when they saw that multitude, the Jews were filled with jealousy and with insulting words they contrasted Paul's affirmations (Acts 13: 45). On the one hand there is the Lord, there is the Holy Spirit who makes the Church grow, and it grows more and more, this is true. But on the other hand there is the evil spirit that tries to destroy the Church. It is always like this. Always like that. It goes on, but then comes the enemy trying to destroy. The balance is always positive in the long run, but how much effort, how much pain, how much martyrdom!

The same thing happened here, in Antioch, and it happens everywhere in the Book of the Acts of the Apostles. Let's think, for example, of Listra, when they arrived and healed a paralytic and everyone believed they were gods and wanted to make sacrifices, and all the people were with them (cf Acts 14: 8-18). Then the others came and convinced them that it was not so. And how did Paul and his companion end up? Stoned (cf Acts 14: 19). There is always this fight. Think of the wizard Elimas, how he made it so that the Gospel did not reach the consul (cf Acts 13: 6-12). Think of the owners of that girl who made the fortune teller: they exploited the girl well, because she used to read palms and received the money that went into the bosses' pockets. And when Paul and the apostles showed that this was a lie, that it was not a good thing, immediately the revolution against them began (cf Acts 16: 16-24). Think of the artisans of the goddess Artèmide in Ephesus, who lost their business because they could not sell those figurines, because people no longer bought them, because they had converted. And so it continued, one thing after the other. On the one hand, there is the Word of God that summons, that makes persecution grow ... and on the other hand, there is a great persecution because it ends up chasing them away, overpowering them ...

And what is the devil's tool to destroy the proclamation of the Gospel? Envy. The Book of Wisdom makes it clear: Because of the devil's envy, sin entered the world (cf Wis 2: 24) - there is envy and jealousy here. Always this bitter, bitter feeling. These people saw how they preached the Gospel and they got angry, they got their insides in knots with anger. And this anger motivated them: this is the anger of the devil, it is the anger that destroys, the anger of that crucify him, crucify him ... of that torture of Jesus. The devil wants to destroy. Always. Always.

Seeing this struggle, this very beautiful saying also applies to us: The Church continues her journey between the consolations of God and the persecutions of the world (cf Saint Augustine, De Civitate Dei, XVIII, 51,2). A Church that has no difficulties is missing something. The devil is too calm. And if the devil is calm, things are not going well. There is always difficulty, temptation, struggle ... The jealousy that destroys. The Holy Spirit creates harmony in the Church, and the evil spirit destroys this harmony ... even today. This has continued up to today. There is always this fight. Temporal powers are an instrument of this jealousy, of this envy. Here the writer tells us that the Jews stirred up the pious women of the nobility (Acts 13: 50). They went to those women and said: These people are revolutionaries, kick them out. The women spoke to the others and chased them away: they were the pious women of the nobility and also the notables of the city (cf Acts 13: 50). They ranged from temporal power; and temporal power can be good: people can be good, but power as such is always dangerous. The power of the world against the power of God moves all this; and always behind this, behind that power, there is money.

We are careful, we are careful with the preaching of the Gospel: never to fall into putting trust in temporal powers and money. For Christians, our source of trust is Jesus Christ and the Holy Spirit that he sent! And the Holy Spirit is the leaven, he is the force that makes the Church grow! Yes, the Church continues her journey forward, in peace, with resignation, joyfully: between the consolations of God and the persecutions of the world.