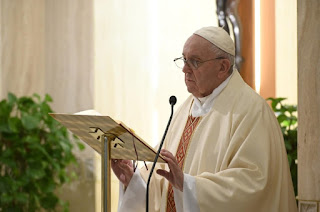 Let us pray today for the dead, those who have died because of the pandemic.  They died alone, they died without a hug from their loved ones, many of them didn't even have a funeral.  May the Lord welcome them into glory. 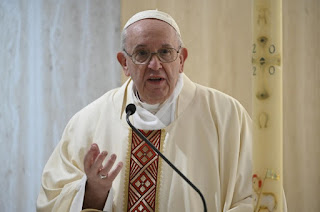 Homily of the Holy Father, Pope Francis
during the Mass celebrated on 5 May 2020

Jesus was in the temple, the feast of the Dedication was near (cf Jn 10: 22-30). Even the Jews, at that time, came around him and said to him: How long are you going to keep us in suspense? If you are the Christ, tell us openly (Jn 10: 24). These people made him lose his patience, and with meekness, Jesus answered them: 'I told you and you do not believe' (Jn 10: 25). They kept saying, But is it you? It is you? - Yes, I told you, but you don't believe! But you do not believe because you are not among my sheep (Jn 10: 26). And this, perhaps, raises a doubt for us: I believe and I belong to the sheep of Jesus; but if Jesus said to us: You cannot believe because you are not a part, is there a prior faith, faith in the meeting with Jesus? What is this:  to be part of the faith of Jesus? What is it that stops me at the door which is Jesus?

There were attitudes prior to the confession of Jesus. Even for us, who are among the flock of Jesus. They are like antipatie previe, which do not let us go forward in the knowledge of the Lord. The first of all these are riches. There are many of us, who entered the door of the Lord, then we stopped and we do not go on because we are imprisoned in wealth. The Lord was hard, with riches, he was very hard, very hard. To the point of saying that it was easier for a camel to go through the eye of a needle than for a rich man to enter the kingdom of heaven (cf Mt 19: 24). This is hard. Riches are an impediment to moving forward. But should we fall into pauperism?  No. But do not be slaves to riches, do not live for riches, because riches are a lord, the lord of this world and we cannot serve two lords (cf. Lk 16:13). Wealth stops us.

Another thing that prevents us from moving forward in the knowledge of Jesus, in belonging to Jesus, is rigidity: rigidity of heart. Even rigidity in the interpretation of the law. Jesus rebukes the Pharisees, the doctors of the Law for this rigidity (cf Mt 23: 1-36). That is not faithfulness: faithfulness is always a gift offered to God; rigidity is a security for myself. I remember once I entered the parish and a lady - a good lady - approached me and said: Father, some advice ... - Yes ... - Last week, Saturday, not yesterday, the other Saturday, we went with the family to a wedding: it was with Mass. It was Saturday afternoon, and we thought that with this Mass we had fulfilled the Sunday obligation. But then, returning home, I thought that the readings of that Mass were not those of Sunday. And so I realized that I am in mortal sin, because on Sunday I did not go because I went on Saturday, but to a Mass that was not a Sunday Mass, because the Readings were not the same.  Such rigidity ... And that lady belonged to an ecclesial movement. Rigidity. This takes us away from the wisdom of Jesus, from the wisdom and beauty of Jesus; it takes away your freedom. And many pastors help this rigidity to grow in the souls of the faithful; and this rigidity does not allow us to enter through the door of Jesus (cf Jn 10: 7): it is more important to observe the law as it is written or how I interpret it, rather than the freedom to go on following Jesus.

Another thing that does not let us go on in the knowledge of Jesus is sloth. Tiredness ... Let's think of that man in the pool: he spent 38 years there (cf Jn 5: 1-9). Sloth. It takes away the will to go on and everything is yes, but ... no, now no, no, but ..., which brings you to the warmth and makes you lukewarm. Sloth is another thing that prevents us from moving forward.

Then, another thing that prevents us from moving forward, from entering, from knowing Jesus and confessing Jesus is the worldly spirit. When the observance of faith, the practice of faith ends in worldliness. And everything is worldly. Let's think about the celebration of some sacraments in some parishes: how much worldliness there is! And the grace of the presence of Jesus is not well understood.

These are the things that prevent us from being part of the sheep of Jesus. We are sheep following all these things: wealth, sloth, rigidity, worldliness, clericalism, modality, ideologies, lifestyles. Freedom is missing. And one cannot follow Jesus without freedom. "But sometimes freedom goes further and we slip. Yes, it's true. It's true. We can slip as we make our way toward freedom. But it is worse to slip before going toward freedom, with these things that prevent you from starting to go.

May the Lord illuminate our path and help us to see, within ourselves, whether we have the freedom to pass through the door that is Jesus and go toward Jesus in order to become the flock, to become the sheep of his flock.
Testo originale nella lingua italiana
Texto en español
Texto em português 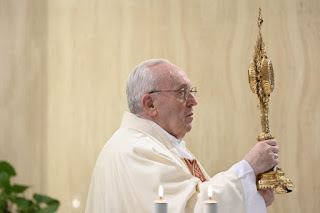