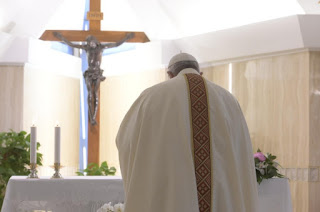 Let us pray today for men and women who are working in communications.  In this time of pandemic, they are risking so much and there is so much work.  May the Lord help them in this work of always broadcasting the truth. 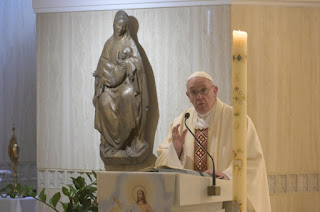 Homily of the Holy Father, Pope Francis
during the Mass celebrated on 6 May 2020

This passage from John's gospel (cf Jn 12: 44-50) shows us the intimacy that existed between Jesus and the Father. Jesus did what the Father told him to do. And for this reason he says: Whoever believes in me does not believe in me, but in the One who sent me (Jn 12: 44). Then he specifies his mission: I have come into the world as light, so that everyone who believes in me may not remain in darkness (Jn 12: 46). He appears as light. Jesus' mission is to illuminate: to give light. He himself said: I am the light of the world (Jn 8: 12). The prophet Isaiah had prophesied this light: The people who walked in darkness have seen a great light (Jn 9, 1). The promise of light that will illuminate the people. And the mission of the apostles is also to bring light. Paul said this to King Agrippa: I have been elected to illuminate, to bring this light - which is not mine, it belongs to another - but to bring light (cf Acts 26: 18). It is the mission of Jesus: to bring light. And the mission of the apostles is to bring the light of Jesus to the world. To illuminate. Because the world was in darkness.

But the drama of the light of Jesus is that it has been rejected. Already at the beginning of the Gospel, John says it clearly: He came to his family and his family did not welcome him. They loved darkness more than light (cf Jn 1: 9-11). Getting used to the darkness, living in the darkness: they cannot accept the light, they cannot; they are slaves to darkness. And this will be Jesus' struggle too; he continues: to illuminate, to bring the light that makes us see things as they are, as they are; it shows freedom, it shows the truth, it shows the way to go, with the light of Jesus.

Paul had this experience of the transition from darkness to light when the Lord met him on the road to Damascus. He was blinded. Blinded. The light of the Lord blinded him. And then, after a few days, through his baptism, the light was restored (cf Acts 9: 1-19). He had this experience of the passage from the darkness, in which he was, to the light. This is also our path, which we sacramentally received in Baptism: for this reason, during the first centuries of the Church, Baptism was called Illumination (cf Saint Justin, Apologia I, 61, 12), because it gave you the light, made you enter the Church. For this reason, in the Baptism ceremony we present a lit candle, a lit candle is presented to the father and mother, because their son or their daughter is illuminated, is illuminated.

Jesus brings light. But the people, the people, his people rejected it. They were so accustomed to the darkness that the light dazzled them, they could not go on ... (cf Jn 1: 10-11). And this is the drama of our sin: sin blinds us and we cannot tolerate light. We have sick eyes. And Jesus says it clearly, in the Gospel of Matthew: If your eye is sick, your whole body will be sick. If your eye sees only darkness, how much darkness will there be within you? (cf Mt 6: 22-23). Darkness ... and conversion is the act of passing from darkness to light.

But what are the things that sicken the eyes, the eyes of faith? Our eyes are sick: what are the things that bring them down, that blind them? Vices, worldly spirit, pride. The vices that bring you down and also, these three things - vices, pride and a worldly spirit - lead you to create a society with others who can stay safe in the darkness. We often talk about the mafia: this is it. But there are spiritual mafias, there are domestic mafias, always looking for someone else to cover themselves and to be able to stay in the darkness. It is not easy to live in the light. The light shows us many bad things within us that we don't want to see: vices, sins ... We think of our vices, we think of our pride, we think of our worldly spirit: these things blind us, they distance us from the light of Jesus.

But if we start thinking about these things, we will not find a wall, no, we will find an exit, because Jesus himself says that He is the light, and also: I came into the world not to condemn the world, but to save the world (cf Jn 12: 46-47). Jesus himself, who is the light, says: Have courage: let yourself be illuminated, let yourself be seen for what you have inside, because it is I who will carry you forward, to save you. I don't condemn you. I save you (cf Jn 12: 47). The Lord saves us from the darkness that we have inside, from the darkness of everyday life, the darkness of social life, of political life, of national, international life ... There is so much darkness inside. And the Lord saves us. But he asks us to see them first; have the courage to see our darkness so that the light of the Lord may come in and save us. 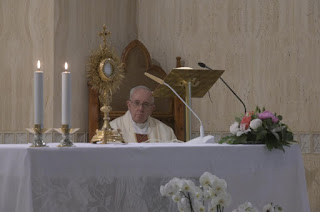