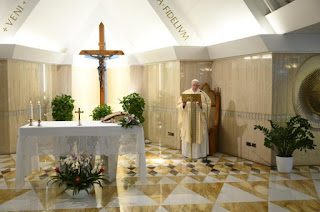 Today, let us offer our prayers for the many people who are cleaning in hospitals, in the streets ... people who empty the garbage cans, who go to houses to take away the garbage: these are jobs that no one sees, but it is a job that is necessary for us to survive.  May the Lord bless them and help them. 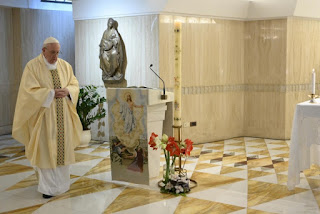 Homily of the Holy Father, Pope Francis
during the Mass celebrated on 17 May 2020

In his farewell addressed to the disciples (cf Jn 14: 15-21), Jesus gives them peace; he gives peace, with a promise: I will not leave you orphans (Jn 14: 18). Peace defends them from that pain, from that painful sense of being orphaned. Today in the world there is a great feeling of being orphaned: many people have many things, but the Father is missing. And in the history of humanity this is repeated: when the Father is missing, something important is missing and there is always the desire to meet, to find the Father, even in ancient myths. We can think of the myths of Oedipus, of Telemachus and many others: always looking for the missing Father. Today we can say that we live in a society where the Father is missing, a sense of being orphaned that affects one's belonging and fraternity.

Only with this awareness of children who are not orphans can we live in peace among us. Always, wars, both small wars and large wars, always have a dimension of being an orphan: the Father who establishes peace is missing. For this reason, when Peter, in the first community, says that they respond to the people because they are Christians (cf 1Peter 3: 15-18), he says: However, this must be done with gentleness and respect, with a right conscience (1 Peter 3: 16), that is, the mildness that the Holy Spirit gives. The Holy Spirit teaches us this mildness, the sweetness of the Father's children. The Holy Spirit does not teach us to insult. And one of the consequences of the sense of being orphaned is insult and war because if there is no Father there are no brothers, brotherhood is lost. They are - this sweetness, respect, gentleness - these are attitudes of belonging, of belonging to a family that is sure of having a Father.

I will pray to the Father and he will send you another Paraclete (Jn 14: 16) who will remind you of access to the Father, who will remind you that we have a Father who is the centre of everything, the origin of everything, the unity of all, the salvation of all ... because he sent his Son to save us all. And now he sends the Holy Spirit to remind us of our access to him, to the Father and, from this fatherhood, this fraternal attitude of mildness, of sweetness, of peace. 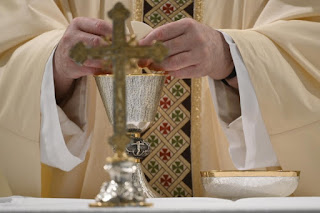