Greetings to some athletes

This morning, at the conclusion of the General Audience, the Holy Father, Pope Francis received in his private Library, a small representative group of athletes who were supposed to participate in the international meeting entitled We Run Together - Simul Currebant organized by Athletica Vaticana, in collaboration with the sports group Yellow Flames of the Guardia di Finanza, the Cortile dei Gentili and the Italian Federation of Athletics, FIDAL-Lazio. The meeting was scheduled for May 21, 2020 but was suspended due to the international health situation.

Cardinal Gianfranco Ravasi, President of the Pontifical Council for Culture, explained the initiative to the Holy Father, who, after thanking the Cardinal, conducted a brief conversation with one of the child athletes.

The Pope then spoke to the group of athletes before reading a message which was directed to all athletes and people involved in sport. 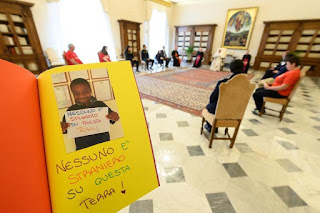 Greetings of the Holy Father, Pope Francis
addressed to the assembled young people

I thank all of you for the work you are doing: everyone is doing something for the community, for others. And this is joy, isn't it? The joy of doing something for others. And then, at the same time, you also receive from others. But what the Cardinal mentioned, the joy of giving, of offering, of offering the beauty of sport, the possibility of everyone offering something that each of you has for the joy and happiness of others. And that's great, it's a human attitude, it's creative. And people even offer their lives for others: mothers for their children, and fathers for their children, and many of you ... give something of yourselves for others. And you give beauty to others, the beauty of sport. This is an important thing: to understand how to give beauty. This helps, because what you are doing is not an exercise, like speed practice or games, no. This is true, but there is more. It is giving to others. It is that motto of the association that is so important: you are not detached from others, You run together, you run together, together.

And there is always an attitude that we find in that passage of the Gospel, of the two disciples who ran to the tomb of Jesus on the morning of the Resurrection (cf. Jn 20: 3-6). The younger one - John - arrived first, and the older one - Peter - got left behind. But there was still respect, as one waited for the other. And there is an ancient medieval rule for pilgrims, for those who made pilgrimages to shrines during the Middle Ages - even today such pilgrimages are made, let's think of Santiago de Compostela, for example - a rule that says: You must go at the pace of the one who is weaker, the one who walks more slowly.  No, but I'm going first ...  No. You have to keep up. Like John did: yes, he arrived first, but he waited for the other. This is a very beautiful thing, which we must learn, as humanity: to keep up with people who have another rhythm, or at least consider them and integrate them into our step.

Thank you.  Thank you for all of this.  And now, I want to do ... but, let us say it as it is: this is a speech.  In all the associations, to all of you, may this remain as a message to all about this wonderful meeting with you. 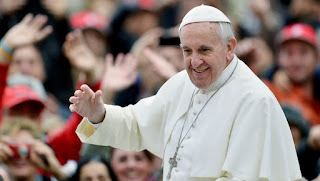 Tomorrow, May 21, the International Athletics meeting We Run Together - Simul Currebant was supposed to take place in Castel Porziano. Olympic champions would race - for the first time - with Paralympic athletes, athletes with mental disabilities, and refugees, migrants and prisoners, who would also have been competition judges. All together and with equal dignity. A concrete testimony of how sport should be: that is, a bridge that unites women and men of different religions and cultures, promoting inclusion, friendship, solidarity and education. A bridge of peace.

Tomorrow you won't be able to run with your legs, but you can still run with your heart. The soul of this inclusive Meeting is supportive: running together. And so the many athletes who have joined - and who, with pleasure, I would have personally met - will make available some sporting objects and experiences for a charity initiative. The entire proceeds will be donated to the health care personnel at the Papa Giovanni XXIII hospitals in Bergamo and to the Poliambulanza Foundation in Brescia, both  of which are symbols of the fight against the pandemic that has hit the whole planet. It is an initiative to help and thank nurses, doctors and hospital staff. They are heroes! They are all living their profession as a vocation, heroically, putting their own lives at risk to save others. Jesus said: "No one has more love than to give his life for others (cf Jn 15: 13).

I am happy that this initiative is promoted by Athletica Vaticana, a reality that testifies concretely, on the streets and among people, the solidarity face of sport. Athletica Vaticana's first gesture was to welcome as honorary athletes some young migrants and a girl with a serious neurodegenerative disease. Today they came here to visit me.

The Fiamme Gialle, the Sports Group of the Guardia di Finanza, and the Cortile del Gentili, a structure of the Pontifical Council for Culture that promotes the meeting and dialogue between believers and non-believers, collaborate with Athletica Vaticana. They have all always shown a particular sensitivity towards the real needs of people: in particular for families assisted by the Santa Marta paediatric dispensary, which has been active for almost a hundred years here in the Vatican. Together with them, the Fidal-Lazio Regional Committee also collaborates on this inclusive sports project.

I encourage you, dear friends and dear sports friends, to live your passion more and more as an experience of unity and solidarity. Just the true values of sport are particularly important to face this time of pandemic and above all, the difficult restart which is unfolding. And in this spirit I invite you to run the race of life together. Thank you for all that you do.
at 21:48